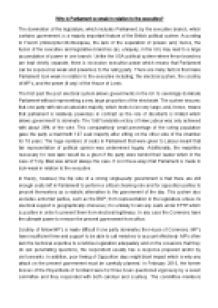 Why is Parliament so weak in relation to the executive?

﻿Why is Parliament so weak in relation to the executive? The domination of the legislature, which includes Parliament, by the executive branch, which contains government, is a majorly important feature of the British political system. According to French philosopher Montesquieu, the lack of the separation of powers and, hence, the fusion of the executive and legislative branches (as, uniquely, in the UK) may lead to a large accumulation of power in one branch. Unlike the USA political system where these branches are kept strictly separate, there is excessive executive power which means that Parliament can be exposed as weak and powerless to the ruling party. There are many factors that make Parliament look weak in relation to the executive including; the electoral system, the scrutiny of MP?s, and the power (if any) of the House of Lords. The first past the post electoral system allows governments in the UK to seemingly dominate Parliament without representing a very large proportion of the electorate. ...read more.

Scrutiny of fellow MP?s is made difficult if one party dominates the House of Commons. MP?s have insufficient time and support to be able to call ministers to account effectively. MPs often lack the technical expertise to scrutinise legislation adequately and on the occasions that they do ask penetrating questions, the respondent usually has a response prepared and/or by civil servants. In addition, poor timing of Opposition days might blunt impact which is why any attack on the present government must be carefully planned. In February 2010, the former bosses of the Royal Bank of Scotland were for three hours questioned vigorously by a select committee and they responded with both candour and courtesy. The committee members probed diligently enough but, not for the first time, they were outsmarted by expert witnesses with too much technical information at their disposal. This proves that the understaffed and poorly resourced scrutinizers cannot do their job properly and, hence, also highlights how weak Parliament are in relation to the executive. ...read more.

It is in this way that Parliament can stand up to the executive, whose party have a majority in Parliament, and force compromises by the government. This particular controversial case of rebellion has proved a success for the Lords as to this day Peers still have to be 100% appointed. In conclusion, it seems Parliament has been made to look powerless by government who can make use of the first past the post system and gain large majorities without large representation. Additionally, scrutiny directed at MP?s is easily combated with the brilliantly crafted answers of government. Government has also become increasingly dominant thanks to further Lords reform by Tony Blair and the mere delaying of laws by which act as a thorn on legislation. However, it has to be said that Parliament has many ways in which it can reduce the ?bullying? it receives from the ruling party. The electoral system has obvious advantages that arguably improve Parliament?s role such as the ability to improve on scrutinising future laws and to offer better decisions than the ruling party. ...read more.