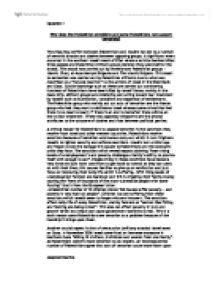 The disputing conflict between Palestinians and Israelis has led to a number of terrorist attacks and clashes between opposing groups. A significant event occurred in the southern Israeli resort of Eilat where a suicide bomber killed three people and Palestinian militant groups claimed they were behind the attack. The attack was carried out by three known Palestinian groups – Islamic Jihad, al-Aqsa Martyrs Brigades and The Islamic Brigade. This resort to extremism was carried out by Palestinian militants due to what was described as a “natural reaction” to the actions of Israel in the West Bank and Gaza. Suicide bombings such as these are carried out considering hundreds of Palestinians have been killed by Israeli forces; mainly in the Gaza strip. Militant groups are retaliating and acting toward bad treatment by Israelis such as humiliation, vandalism and expansion of settlements.

The Palestinian group who mainly act out acts of terrorism are the Hamas group who feel they want to obliterate Israel whereas some minorities feel there is no need to react; if there is an end to terrorism there will be an end to bad treatment. These two opposing viewpoints are the pivotal attributes to the outcome of clashes and riots between political parties.

A critical reason for Palestinians to oppose terrorism is the sanctions they receive from Israel and other western countries. Palestinians receive sanctions because of terrorism acts Hamas carry out which in turn frightens Israelis to tighten security and enforce sanctions. Israelis turn a blind eye and forget to see the damage this causes to Palestinians and the economic crisis they face. The sanctions which reveal reports claiming “warn rising levels of unemployment’s and poverty challenge a family’s ability to provide itself with enough to eat”. People living in these conditions have become very irate and just want conditions to get back to normal so they can carry on with their lives; this causes families to give up on retribution and just focus on improving their daily life which is suffering. With rising levels of unemployment farmers are bankrupt and this is crippling their family money causing the “tens of thousands of the most vulnerable people with some funding” that’s from the European Union.

A Palestinian mother of 10 children states “all houses suffer poverty – and poverty is very hard on people”. Children too are suffering from these sanctions which Israelis seem to forget who are innocent. The sanctions affect daily life of every Palestinian, mainly farmers as “sectors like fishing and farming are being ruined”. This also can affect poverty in turn and growth which as a result can cause government statistics to fall. This is a main reason some Palestinians see terrorism as a problem because of the hardship it brings upon them.

Another crucial aspect is that of destruction (military attacks) Israel exert on Gaza. In November 2006 Israel committed an immense massacre in Northern Gaza “killing 19 civilians, 8 children and women from one family”.  As Palestinians commit more terrorism so do Israelis. An inconsequential number of Palestinians agree that acts of terrorism cause more harm upon themselves and don’t want to get involved. People feel upset because of tragedies they witness and many people are personally involved had have subjective views on this aspect.

Faultless youth are also opposing terrorism as a case explains “I feel like a stranger here in my homeland, this place is holy but they’re killing each other”. This quote strongly puts across the view of a 27 year old Palestinian Muslim who’s married to a 26 year old Jewish girl (Jasmine) and is trying to make his marriage accepted. This dilemma has been going on for some time and as Jasmine explains “I feel like a refugee”, the dispute between Palestinians and Israelis is affecting lives of innocent people who fell in love and could just do without the bother of politics and suffering.

A further attribute leading to disfavour of terrorism is the disruption of daily life it causes; some Palestinians find the acts of terrorism annoying and prevent them from getting the best out of life. Israelis out of apprehension of terrorism have created Jew only roads which is another factor resulting in unemployment as civilians cannot travel to work. Israelis also have enforced curfews upon Palestinians and as seen in a John Pilger documentary a woman illustrates the anguish the curfews cause her as she is unable to meet with friends or complete daily tasks she would normally do. The disruption the Palestinians receive results them in having no social life and in addition leaves them afflicted. Another act of disruption caused by Israelis was when Israeli troops pulled out of the territory, “home to 1.4 million Palestinians last summer after an occupation lasting 38 years”. This duration of occupation of Palestinian land also causes disruption to daily lives of Palestinians.

This small number of Palestinians feel if there was a stop to terrorism their lives would become happier and the Israelis would not agree to disrupt their lives.

A Palestinian party named Fatah which have been head at the national movement until the 1950’s believe there is no need for the destruction of Israel and all Palestinian problems can be resolved through diplomacy. The PA President Mahmoud Abbas clarifies “We reject these acts and we do not believe that they are in the interest of the Palestinian cause”.  This approach is taken by a number of Palestinians as they believe they will not establish a free Palestine through retaliatory attacks against Israel.

On the other hand Hamas another Palestinian party group which won a stunning victory in parliamentary elections in January 2006 think the only option in order to achieve a free Palestine is to demolish Israel. This view is not supported by the Fatah party as they feel violence doesn’t resolve anything.

There is a big dispute between terrorism and negotiation; both different Palestinian groups are involved in civil wars as they have totally different viewpoints. As Hamas gained most voted in elections civilians are seeing unexpected changes throughout Palestine due to these acts of terrorism, “Hamas who destroyed everything. They promised us ‘change and reform’”. Palestinians are fed up with the way of Hamas and their attitudes towards Israel they feel it is not benefiting their country in any way “only change I can see is there is no money, gas or petrol”. It’s not only both opposing parties who feel discomfort it’s also happening within families as they are becoming split up because of their different viewpoints. Two Palestinian brothers end up in controversy as Nur is supporting Fatah where Iyad supports Hamas. “Shakes his beard in disapproval”. Families which are more important than politics or holy land are divided due to arguments like these.

Fatah and Hamas’s world views are fundamentally at odds as they both have a different philosophy. Fatah’s philosophy is for the recognition of Israel to exist through diplomacy whereas some Hamas sub-groups do not recognize Israel’s right to exist and therefore resort to terrorism. The failure of Hamas which has resulted in sanctions is the cause of why some Palestinians do not agree with terrorism.

Some Palestinian civilians feel that terrorism is morally wrong and therefore object to partaking in any acts of such kind. A recent crime as it is seen by some Palestinians is the kidnap of a BBC correspondent Alan Johnston; a “Palestinian Interior Minister Sayeed Sayyam said Johnston’s disappearance was a ‘criminal act’”.  It is known by Palestinians that the kidnap was done as a form of retaliation and this provokes Palestinians to feel devaluated as a nation and as a whole loose their dignity so do not agree with terrorism.

A small amount of groups are organised worldwide that deal with issues such as these and oppose any acts of terrorism, an example of such groups are “Salam Alann” an international organisation which oppose violence, suicide bombings and extremism. This organisation resists fanatics and thinks peace must be made through negotiation only.

Another organisation which was set up by a Journalist in Chicago is Ray Hanania who organises Palestinian and Jewish comedians to put together a show about the Arab Israeli. The journalist hopes to show that the conflict is stupid and that Jews and Arabs can work together. This man has many supporters who also believe in peace through moral clarity.

Both organisations are opposition of terrorism in Palestine and internationally; this shows the global scale of the conflict and how it not only affect Palestinans but families or friends who live abroad.

Hamas Palestinians also oppose to terrorism considering they act as freedom fighters not terrorists. The Hamas Minister stated “We don’t glorify terrorism, we are against it. We are freedom fighters”. Another strategy used by the Hamas group is the use of glorifying acts through children; suicide bombers are praised as martyrs and are doing the moral thing. These is a key attribute for numbers of Palestinians to revolt against terrorism and see that harming innocent civilians will not bring peace but resumes conflict.

One can conclude from the above arguments that opposition of terrorism leads to lots of discomfort and anxiousness not only in Palestine but internationally. This causes an ever decreasing popularity for terrorism and it can also cause Palestinian leaders to disfavour terrorism because they are in need of support from International countries. The problems small organisations and individuals face are ever increasing; people suffering, sanctions and humiliation is all caused by Israelis but avengement in the long run does not settle any controversy but in a matter of fact makes it more complicated as is seen by Palestinians who oppose terrorism. The only way to solve these problems is negotiation and I feel the least important point for Palestinians to oppose terrorism is how some international groups feel that terrorism is morally wrong. This point in not as important because most organisations are international and the majority of supporters are from outside Palestine with no real subjective idea about how daily life is.

The disruption to daily life is what causes some problems also but this problem is linked to the Military attacks Israel cause on Gaza because they both interlink and with out destruction there would be no disruption to daily life. The sanctions section is also linked to the military attacks because they would not be present if Israel did not attack Gaza in the first place.

All problems of sanction, military attacks, disruption to daily life and morally wrong all linked together leaving the most important point to the opposition of terrorism which is the difference between Palestinian groups. Terrorism is increasing unpopular throughout minds of Palestinian leaders who want to gain support and trust of international communities who could also help resolve the conflict. If Hamas(terrorism and freedom fighters) and Fatah(freedom through diplomacy) would negotiate there would not be as much terrorism because they would have same viewpoints and decide to negotiate not only with one another but Israel also to finally achieve an end to the Arab Israeli conflict.