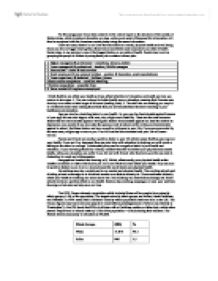 Write a short report on the structure of the society of Britain today, which includes information on class, culture and racial differences this information will then be compared with the American society today using the same information.

For this assignment I have been asked to write a short report on the structure of the society of Britain today, which includes information on class, culture and racial differences this information will then be compared with the American society today using the same information. There are many factors in our lives that can affect our mental, physical health and well being. Some can have a bigger bearing than others but all contribute small amounts to our state of health. Social class, in my opinion is one of the biggest factors on our state of health. Social class involves grouping the people in Britain by using there jobs or status in there jobs: 1. Higher managerial & professional - executives, lawyers, doctors 2. Lower managerial & professional - teachers, Middle managers 3. Intermediate - clerks & bank workers 4. Small employers & own account workers - painters & decorators, small manufacturers 5. Lower supervisory & technical - builders, joiners 6.Semi routine occupations - unskilled labouring 7.Routine occupations - assembly lines 8. Never worked & long-term unemployed. I think that this can affect your health as it can affect what kind of education and health services you receive in two ways. 1. You can not pay for better health care or education meaning that illnesses may develop more often or take longer to be cured (waiting lists). ...read more.

In the 2000 census, respondents who are multiracial will be allowed to check more than one box for the first time. it could mean a decline in the black population to 25 million from 32 million. Skin color, the most obvious way of determining a person's race, might become less meaningful. He cited a study that found that one-quarter of the darkest white people were darker than one-quarter of the lightest black people. Still, diversity has yet to reach much of the country. In 1990, 80 percent of the black population lived in 10 percent of the U.S. land mass, mostly in the southeast quadrant of the country. A large number of the country's 3,100 counties had a black population below 0.5 percent. A map showing the distribution of the Hispanic population was the reverse, with the concentration being in the southwest quadrant of the country. And while 90 percent of Latinos reside in 10 states, they live in far more counties across the country than do African Americans. The Asian American population is even more concentrated. Almost half the country's Asians - 43 percent - are in three metropolitan areas: San Francisco, Los Angeles and New York. Healthcare in Britain. British healthcare is provided by the NHS the national health service, we get this service free. ...read more.

Junior Ministers - generally Parliamentary Under-Secretaries of State or, where the senior minister is not a Secretary of State, simply Parliamentary Secretaries - share in parliamentary and departmental duties. They may also be given responsibilitiy, directly under the departmental minister, for specific aspects of the department's work The Americans also have a government structure but that dopes not mean that it is necessarily that it is like ours here is a diagram on the Americans government structure. When you compare the American and British government you can see that they both have a head of government. The English have the Prime Minister and the American's have the President, these people head up the government and make the most important decisions about the country. The American president's office has lots of different departments branching off of it as does the British they both have different departments with heads of these departments. When comparing the racial diversity in America and Britain I found the while in Britain most different racial groups have scatterd in the U.S. they have stayed close. E.g." Almost half the country's Asians - 43 percent - are in three metropolitan areas: San Francisco, Los Angeles and New York" I don't really think that there is a reason for these small concentrated areas of racial groups just like there is no reason fro the way they have spread out over England. ...read more.