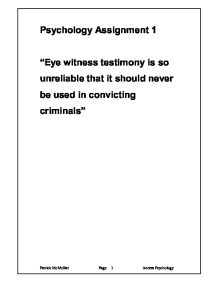 Eye witness testimony is so unreliable that it should never be used in convicting criminals. Discuss.

They may appear nervous and stressed and if their anxiety is communicated via non-verbal indicators, witnesses may base their selection on this information. The resemblance of the foils to the suspect is crucial, but there is little proof of how this is regulated, and during particularly controversial investigations the pressure will be on to secure an identification as quickly as possible. If the suspect has an unusual appearance it will be even more difficult to find physically similar foils. Legal challenges are often made on the grounds that identification parades were not conducted fairly. An example is the Jennifer Thompson case. Jennifer was a college student back in 1984. One night an intruder burst into her flat and held a knife against her throat. As he raped her Jennifer watchfully memorised his appearance, studying every detail of his face, determined that if she lived her aggressor would be caught and imprisoned. Later that day she worked with police officers in drawing up a sketch, looking through hundreds of images of facial features to ensure she got it right. It was just a few days later when she identified Ronald Cotton as the rapist. She was absolutely certain and Jennifer Thompson picked him out again in a police identity parade. On the strengths of Jennifer's eyewitness testimony Ronald was imprisoned - she declared it to be the happiest day of her life. Indeed she was so sure of his guilt that she wanted him electrocuted, desiring to flip the switch herself. ...read more.

Racial prejudice can very easily affect the way the world is viewed, as was demonstrated by Duncan (1976). Chance and Goldstein (1996) have shown that identifying faces from a different ethnic group is more difficult than identifying faces from one's individual group, because of inappropriate and unfamiliar encoding strategies. The area of cross-race identification thus produces a particularly challenging issue in evaluating eyewitness testimony. Duncan (1976) was concerned in the effect of stereotypes on perception. White participants were asked to view a video of a disagreement between two people which resulted in one pushing the other. In fact four versions of the video were shown to different groups: Tape 1 (White assailant/white victim) Tape 2 (White assailant/black victim) Tape 3 (Black assailant/white victim) Tape 4 (Black assailant/black victim) Participants were asked whether the behaviour of the person who pushed the other could best be described as 'playing around' or as 'violent behaviour'. When the perpetrator was black, 70% of participants described his actions as violent, while only 13% of participants chose this descriptor when the perpetrator was white. (Lawton, 2011. p 28.). Research seems to reveal that eyewitness testimony, while occasionally believable, is not always as reliable as the police and jurors believe. Witnesses are vulnerable to influences at a number of stages throughout their observation and recall of an event, and are also vulnerable to inaccurate post event information. In view of this it seems clear that eyewitness testimony should never be allowed as the sole evidence supporting a conviction, Psychologists can greatly assist the police in developing interview techniques which can improve the extent and the accuracy of witnesses' recall. ...read more.