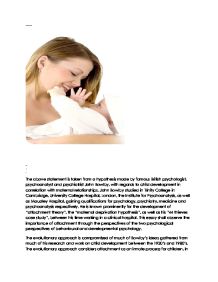 If a child does not form a significant attachment to a main caregiver within the first five years of life, he/she will grow up to become an affectionless psychopath- Discuss

"If a child does not form a significant attachment to a main caregiver within the first five years of life, he/she will grow up to become an affectionless psychopath"- Discuss Name: Matthew Joseph Addai Tutor: Charlotte Curtis Date: 28/3/11 The above statement is taken from a hypothesis made by famous British psychologist, psychoanalyst and psychiatrist John Bowlby, with regards to child development in correlation with maternal relationships. John Bowlby studied in Trinity College in Cambridge, University College Hospital, London, the Institute for Psychoanalysis, as well as Maudley Hospital, gaining qualifications for psychology, psychiatry, medicine and psychoanalysis respectively. He is known prominently for the development of "attachment theory", the "maternal deprivation hypothesis", as well as his "44 thieves case study", between his time working in a clinical hospital. This essay shall observe the importance of attachment through the perspectives of the two psychological perspectives of behavioural and developmental psychology. The evolutionary approach is compromised of much of Bowlby's ideas gathered from much of his research and work on child development between the 1930's and 1980's. The evolutionary approach considers attachment as an innate process for children, in that they are naturally inclined to seek development of one with a caregiver. ...read more.

His crying stopped, and for the first time he looked directly at his mother. It was a long hard look, one she had never seen before." This is in complete contrast to three different infants studied by the couple, whose parents visited much more frequently than that of John. Upon the return of their parents, the infants were shown to be ecstatic upon being re-united with them. This supports the maternal deprivation hypothesis formed by Bowlby in 1952, as the hypothesis states that it is important for infants to develop an attachment with a primary caregiver and that failure to do so would result in severe emotional and mental issues for the child in the future. The Strange Situation" study by Mary Ainsworth (1978), examines the behavior of infants under conditions of stress and unfamiliarity as created through the presence of a stranger and separation from their primary caregiver, and therefore measuring the level of separation anxiety and stranger anxiety through eight different episodes lasting 3 minutes each. Through this investigation, three different forms of attachment were discovered which helped to provide evidence for Bowlby's link of the development of an attachment in relation to psychopathy. ...read more.

In Bandura's experiment, he observed how children who observed the display of aggression by an adult would later imitate that same behavior later on, depending on factors such as their own sex, as well as the adult's respectively.The group involved consisted of 36 boys and 36 girls aged between 37-69 months. Upon the conclusion of the experiment it was found that the boys who had male role models, were more likely to imitate their behavior than girls who had female models, yet girls who had either model, showed differing forms of aggression (verbal for female, physical for male). There are criticisms of this experiment, such as the fact that there is no way to determine whether the displays of such behavior have a long-term effect on the children due to the results being collected rather quickly. The quality of the results are also seen as questionable, due to the fact that the child and stranger are not familiar with each other, and that they're not able to interact effectively. In conclusion to this therefore, it can be seen that the forming of an attachment is critical to the sound development of a child's mind as evidence by the findings of biological psychologists such as Mary Ainsworth and John Bowlby. Reference list 1) Mike Cardwell, Cara Flanagan, Revised Edition Psychology A.S. The Complete Companion 2) http://www.holah.co.uk/study/bandura/ 3) Robert Shaw, http://www.childrenwebmag.com/articles/key-child-care-texts/young-children-in-brief-separation-by-james-and-joyce-robertson 1 2) Operant conditioning-Skinner ...read more.

Rather a muddled attempt to answer this question - some irrelevant material included. 3*