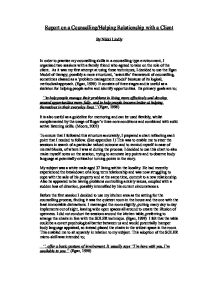 Report on a Counselling/Helping Relationship with a Client By Nikki Lindly In order to practise my counselling skills in a counselling type environment, I organised two sessions with a family friend who agreed to take on the role of the client. As it was my first attempt at using these techniques, I decided to use the Egan Model of therapy, possibly a more structured, 'scientific' framework of counselling, sometimes classed as a 'problem-management model' because of its logical, methodical approach. (Egan, 1998) It consists of three stages and is useful as a skeleton for helping people solve and identify opportunities. Its primary goals are to; ''to help people manage their problems in living more effectively and develop unused opportunities more fully, and to help people become better at helping themselves in their everyday lives.'' (Egan, 1998) It is also useful as a guideline for mentoring and can be used flexibly, whilst complemented by the usage of Roger's three core conditions and combined with solid active listening skills. (Moore, 2002) To ensure that I followed this structure accurately, I prepared a chart reflecting each point that I needed to follow. ...read more.

He described the effect bad acne had taken upon his confidence and described an incidence of a humiliating mugging at the hands of older boys. At this stage his body language was extremely negative, his eyes were lowered, arms folded, at times failing to control involuntary knee jerks. The core conditions of unconditional positive regard and empathy came into effect as he detailed the pain and self loathing that came with criticism from female peers, making his insecurities and low self esteem more apparent. During this time I struggled to actively listen to Lee, attempting to gain advanced empathy. (Hough, 2002).However, I found it mentally tiring to constantly project the SOLER principle, yet still annotate critical moments down on paper, highlighting my inexperience in the role of counsellor. As Lee's story progressed, I became aware that Lee felt that he had a somewhat complicated emotional life, with multiple issues leading up to his present situation, these incidences tending to come out in rushes of words. I realised that learning to prioritise and focus on one issue at a time could be one of Lee's valued outcomes. ...read more.

I was surprised by how mentally drained I felt after both sessions, trying to incorporate the three core conditions along with micro-skills and uphold the SOLER technique at the same time. External barriers were my note taking efforts which I felt distracted my listening and at times I dipped in and out of empathy as I temporarily lost hold of the current theme, and back tracking was hard. I asked Lee to write me an honest review of the session the following day (see appendice 2) so I could reflect upon my performance. I received positive comments, however it was noted that I gave my opinion on what was best for him at times, rather than to allow him to gain his own insight with guidance. I realised from this that I had unwittingly let my own personality and value base undermine unconditional positive regard and empathy, a definite covert pitfall when attempting a counsellor role. I now feel that the counselling process is more complex and sensitive than I had expected, but was surprised by how the structure of the Egan Model had performed, highlighting problems and seeking smart outcomes almost like a recipe. Because of its ease of use, I would definitely consider using it again. ...read more.