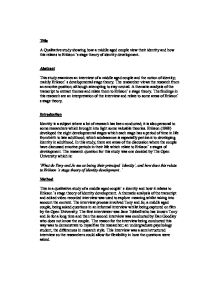 Identity is a subject where a lot of research has been conducted; it is also personal to some researchers which brought into light some valuable theories. Erikson (1968) developed the eight developmental stages which each stage has a period of time in life from birth to late adulthood; which adolescence is especially pertinent to developing identity in adulthood. In this study, there are areas of the discussion where the couple have discussed emotive periods in their life which relate to Erikson` s stages of development. The research question for this study was one decided by The Open University which is:

`What do Tony and Jo see as being their principal `identity`, and how does this relate to Erikson `s stage theory of identity development. `

This is a qualitative study of a middle aged couple` s identity and how it relates to Erikson `s stage theory of identity development. A thematic analysis of the transcript and edited video recorded interview was used to explore meaning whilst taking into account the context. The interview process involved Tony and Jo; a middle aged couple, being asked questions in an informal interview whilst being captured on film by the Open University. The first interviewer was Jane Tobbell who has known Tony and Jo for a long time and then the second interview was conducted by Dan Goodley who does not know the couple.  The reason for the interview being conducted this way was to demonstrate to myself as the researcher; an undergraduate psychology student, the differences in research style. This interview was a semi structured interview so the researchers could allow for flexibility in how the questions were asked.

As with all psychological study, ethical implications were considered, the study involved using pre existing materials provided by the Open University. It is also important to note that there was no particularly intrusive questions being asked by either interviewer and that the names of the participants involved is only the first name, anonymity has been preserved. With this in mind, I was able to carry out the research without the need for permission from the participants who were interviewed.

The analysis which I carried out involved reading the transcript and highlighting themes relating to identity.

What do Tony and Jo see as being their principal `identity`, and how does this relate to Erikson `s stage theory of identity development? This is the research question which has been devised by the Open University course team; as I preferred not to use my own for this study. When carrying out the study I found three main themes, identity, lifespan development and attachment and separation, which were the choice of themes from The Open University course materials and were readily identifiable within the transcript.  The theme of identity encompasses a multitude of theories some which I have identified:

The opening statement from Tony relates to Erikson` s stage theory of identity development, late adulthood – integrity vs. despair – fulfilment or disappointment. This also links to Erikson` s notion of ego identity, in which it appears that Tony has a secure feeling of who he is.

Tony: ` A mass of contradiction. A workaholic to a certain extent. Fairly easy going. I’m always accused of manipulating situations. But that’s just my management style. [lines 7 to 9]

This related by the quality of being honest and having strong moral principals, the integrity.

Another theme which is evident through the transcript is the area that Erikson found particularly important is in the adolescence stage, through which many experiences can be poignant at that stage in development.

In the second interview, the interviewer asks the couple a question relating to the notion of a shared identity between a married couple and how individual identity can conflict with the shared identity. This relates to Erikson` s stage theory in several areas which have been developed through life such as: identity achievement, each individual will strive to keep their identity:

And then Jo reaffirms with…

This demonstrates the notion of striving to be individual within a relationship although within the transcript there is some context which relates to the notion of a shared identity.

After which Tony reiterates with…

Although this statement by Tony reiterates that they not one being, their understanding of taking on a shared identity is probably different to the literature within psychology; the latter being mentioned by the interviewer:

Dan: `…literature in psychology that says, `when a couple get together one of the biggest conflicts they have is maintaining their own individual identities and taking on a shared one `  [lines 105 to108]

It should it made clear that this is a personal interpretation of the transcript and video. Also, it is likely that other researchers would represent this research in a different way and possibly have different aim. The aim of this study was to explore how a middle aged couple view their identity and how this relates to Erikson` s stage theory of identity development. Within the transcript there is reference to the areas of Erikson` s eight developmental stages; which Erikson saw as `identity achievement as a lifelong process` (Phoenix 2002).

It is evident in the transcript that there are periods within their lives that have had a traumatic effect on the couple. For example, where Jo refers to the period where she has been removed from her primary care giver in childhood; which she refers to in the interview and states that she went boarding school (lines 45 to 47). When Dan does the second interview Jo refers to stability and children:

This demonstrates the role that Jo has taken as a mother in society, having learnt from her own traumatic experiences as a child. These periods of disruption in childhood relate to the Eriksonian idea of adolescence and the themes within it; identity crisis, psychosocial moratorium, ego identity and role diffusion. Tony states in the interview similar experiences around the same age:

And also shows that he had begun to develop his identity early on in childhood; which relates to normative crisis stage of identity vs. inferiority.

The development of identity through childhood to adulthood has been shown in the transcript by the interviewers. Each interviewer has a different style in the interview, which brings out different themes in the discussion. The first interviewer Jane has known the couple for some time and this may have a difference upon the participants. They may be more relaxed with her interview technique in which the first question to Tony; he appears to be comfortable and honest with his answer. The second interviewer has a slightly different style and brings out some other experiences the couple have had which appear to be more poignant in context than the interview with Jane; possibly the couple wish not to delve to deep into their experiences with a friend.

As the researcher of this project I have tried remain impartial from the discussion; which is difficult when I have had similar experiences of disruptions in childhood. An important area in identity development; Erikson` s notion of adolescence, has been an important part in the acceptance of social roles and individual identity. This is an area I have felt quite strongly about through my own experience; this is where I begin to contradict myself in that I tried to remain impartial and have said the opposite because of the emotional content.

The conclusion in the discussion is from my own point of view from watching the video several times and reading the transcript. I feel that if I had carried out the interview it would have had a different outcome; even some emotive content discussed further without going to deep. This could be difficult as in the third interview the interviewees are asked about their experiences of the interview where Tony would possibly oppose this.

As a second year part time psychology student, I would have to adopt a more structured approach with a little flexibility within the interview.