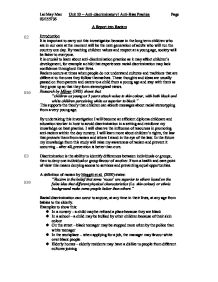 A Report into Racism

A Report into Racism Introduction It is important to carry out this investigation because in the long term children who are in our care at the moment will be the next generation of adults who will run the country one day. By teaching children values and respect at a young age, society will be fairer to everyone. It is crucial to learn about anti-discrimination practice as it may affect children's development, for example a child that experiences racial discrimination may lack confidence throughout their lives. Racism occurs at times when people do not understand cultures and traditions that are different to the ones they follow themselves. These thoughts and ideas are usually passed on from parents and carers to a child from a young age and stay with them as they grow up so that they form stereotypical views. Research by Milner (1983) shows that "children as young as 3 years attach value to skin colour, with both black and white children perceiving white as superior to black." This supports the theory that children can absorb messages about racial stereotyping from a very young age. By undertaking this investigation I will become an efficient diploma childcare and education worker in how to avoid discrimination in a setting and reinforce my knowledge on best practice. I will observe the influence of resources in promoting anti-racism within the day nursery. I will learn more about children's rights, the law that protects them from racism and where I stand in the eye of the law. ...read more.

Legislation in themselves do not stop discrimination just like speed cameras do not stop people speeding. The existence of a law does send out a very clear message that discrimination is not acceptable under any circumstances and there are consequences for those who decide to disregard the laws. > Race Relations Act 1965 outlawed discrimination on basis of race in provision of goods and services, employment, housing. Any attempts to carry out racial hatred became an offence under this Act as well. > In 1976 Commission for Racial Equality given power to start court proceedings in instances of discrimination > Children's Act 1989 required that needs arising from children's race, culture, religion and language to be considered by those caring for them. All policies are only effective in promoting their aims if staff are committed to implementing them, if they are properly resourced and regularly evaluated, reviewed and updated. "Policies can increase awareness, but will not in themselves, change attitudes or practice." Beaver et al. (1999) This quote shows that policy guidelines need to be carried out with good practice; just having the policy is not enough to prevent racism occurring in the future. Good practice is essential for children to enhance their social, physical, emotional, intellectual and linguistic development. Even with all these Acts, policies and legislation present in the current law, if racism related cases are taken to court, according to Beaver (2001) "Successful prosecutions are comparatively rare." The law in its current state needs to be amended so that the legal system defends the accused more than witnesses and the suffering families. ...read more.

Positive images of ethnic minorities, women, different religions, people with disabilities, different lifestyles should be shown to children. Reading materials, artwork (including displays and posters), dressing up clothes and games can reflect diversity in society. Using skin colour paints/crayons allows all children to draw themselves to the best of their skin colour, not excluding anyone. In cookery lessons, foods from different countries can be made to promote anti-discrimination and explore different ways of cooking, tastes and textures. In role-play children can be taught how people from different cultures act and live; videos may be used to stimulate their imagination. Celebrating religious festivals allows children to achieve an insight into a different culture; they can eat special foods; make special posters/items to show their understanding etc. "Having the right resources does not in itself ensure equality and diversity is being promoted. It needs positive language and attitudes of staff to place correct values on resources and activities provided." Tassoni (2002) The Rights of Children as quoted by Beaver (1999) > Have their needs met and safeguarded > Be protected from neglect, abuse and exploitation > Be brought up in their family of birth whenever possible > Be considered as an individual, to be listened to and have their wishes and feelings taken into account when decisions are made concerning their welfare A child care and education worker should focus on an individual child's personality as a relationship is built up, not ethnicity, religion or background. They should also promote a broad range of cultures, religions and beliefs by valuing and exploring differences with children in their care. Children's sense of belonging to their culture is very important part of their lives and needs to be acknowledged and valued. ...read more.