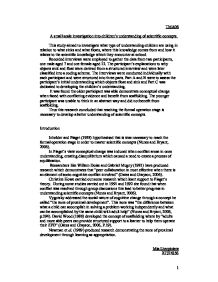 A small scale investigation into children's understanding of scientific concepts.

TMA06 A small scale investigation into children's understanding of scientific concepts. This study aimed to investigate what type of understanding children are using in relation to what sinks and what floats, where this knowledge comes from and how it relates to the scientific knowledge which they encounter at school. Recorded interviews were employed to gather the data from two participants, one male aged 7 and one female aged 12. The participant's explanations to why objects sink and float were derived from a structured interview and were later classified into a coding scheme. The interviews were conducted individually with each participant and were structured into three parts. Part A and B were to assess the participant's initial understanding which objects float and sink and Part C was dedicated to developing the children's understanding. It was found the older participant was able demonstrate conceptual change when faced with conflicting evidence and benefit from scaffolding. The younger participant was unable to think in an abstract way and did not benefit from scaffolding. Thus this research concluded that reaching the formal operation stage is necessary to develop a better understanding of scientific concepts. Introduction Inhelder and Piaget (1958) hypothesised that is was necessary to reach the formal operation stage in order to master scientific concepts (Nunes and Bryant, 2006). In Piaget's view conceptual change was induced when conflict arose in ones understanding, creating disequilibrium which caused a need to create a process of equilibration. Researchers like Willem Doise and Gabriel Mugny (1981) have produced research which demonstrates that "peer collaboration is most effective when there is an element of socio-cognitive conflict involved" (Oates and Grayson, 2006). Christine Howe carried out some research which leant support to Piaget's theory. During some studies carried out in 1991 and 1992 she found that when conflict was resolved through group discussions this lead to better progress in understanding scientific concepts (Nunes and Bryant, 2006). ...read more.

TMA06 Table 5 indicates that Jessica shows no pattern of consistency in her reasoning for floating and sinking but throughout the investigation displays a clear process of conceptual change. Daniel (table 6) however, could be seen as tempting to apply a generalised theory through out the three parts by consistently using weight and shape as the main causal themes, these two main causal themes appear dominant throughout the interview. Mia Lherpiniere X7374356 TMA06 Discussion The two opposing theories by Piaget and Vygotsky which initiated this investigation were given support by the data collected in this investigation. The results from this investigation indicated that the older participant was able to develop her understanding further with adult guidance to eventually achieve a better understanding of why things float and sink thus supporting the original prediction for this investigation. The younger participant however did not seem to benefit from the scaffolding and despite conflicting evidence to his understanding choose to sustain his own theory on why objects float and sink this concurs with Piaget's theory. Both children seem to have a good working knowledge about objects which float and sink. Aspects of both Piaget's and Vygotsky's theory came to light through this investigation. Jessica seemed to have reached Piaget's formal operation stage where by she was able to think in an abstract way about the scientific concept under investigation. She also displayed conceptual change as a result from conflicting evidence as Howe et al. (1992) suggested, this was demonstrated by inconsistency of explanations of why all objects float and sink. Jessica did not seem to have a single theory through out the investigation but rather adapted her explanations when faced with conflicting evidence. Vygotsky's theory of ZPD was well demonstrated in Part C of the interview with Jessica. With the aid of scaffolding Jessica was able to accomplish an understanding which alone she would not have. Daniel (age 7) ...read more.

Part C: developing children's understanding Stage 7: a Piagetian approach - inducing cognitive conflict. Professor Nunes draws to the child's attention examples where their explanations are inconsistent and demonstrate an incomplete understanding. For example a child who states that "heavy things sink" may be asked to consider the heavy wood block, that floats, and the light needle that sinks. This stage finishes with the child identifying the objects that floated and being asked to explain why all the items in that group floated. This is repeated for the objects that sink. Stage 8: scaffolding children's thinking. Scales are used in an attempt to help the child to take account of both size and weight, and to develop a more adequate (albeit incomplete) explanatory concept. Stage 9: re-assessing the child's understanding. Finally the child is asked to explain why the objects that float and sink behave as they do. Mia Lherpiniere X7374356 TMA06 Appendix 3. Daniel Age: 7 Float Causal code Sink Causal code Part A because they're all shaped like a boat. (Okay.) A type of boat Because they're light Sh, W Because they're heavy W Part B Because they're shaped like something which floats. Because it's really light. Sh, W Because some of them are heavy They're all quite tall. Sh, W Part C The iron floats, (the iron floats) they're shaped like a boat and they're light. M, Sh, W They're heavy and they're not exactly shaped like a boat like those are. Sh, W Jessica Age:12 Float Causal code Sink Causal code Part A They're all quite light W They're all quite heavy W Part B No, I can't think Well, these are all wood and all of the wood floats, and these are all wax and all of the wax floats. OS ... those ones are made of metal and that one's a rock and rocks sink because they're rocks. They're rubber OS Part C They have less mass than those ones They would all have to be the same size. Ms, S They have less mass than those ones They would all have to be the same size. ...read more.