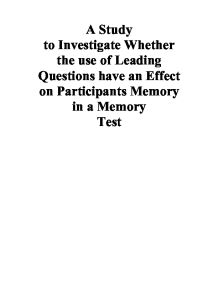 I chose the image out of vogue as it wasn't insulting or would cause offence to anyone who took part in the experiment. It also had a lot going on, there were many colours, shapes and items on the page, which gave the participants a lot to think about. The experimenter chose to ask participants 5 questions even though they were only going to analyse and compare the answers to one of them. These questions were used as distracter questions so that the participant is lead to believe that the aim of the experiment is really a memory test. The participants were shown this image for exactly 60 seconds before it was taken away from them. The experimenter then asked them 5 questions about the picture, 1 of which was a leading question, which the results will be focusing on. Participants had as much time as needed to answer the questions but the experimenter had to accept their first answer. Procedure I first approached possible participants in the sixth form centre at King Edwards VI high school in Morpeth and introduced myself as a psychology student and said I was looking for people to take part in a simple memory test, would they be willing to give me some of there time. If they agreed I gave them the consent form, which had a copy of the brief (see copy below and in appendix) at the top, this told the participants their task and introduced them to what they were going to have to do. They read through it and if they still agreed they would partake in the experiment they would and give formal informed consent in the form of a signature on the consent form. ...read more.