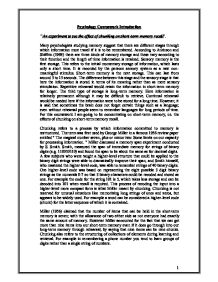 &quot;An experiment to see the effect of chunking on short-term memory recall&quot;.

Psychology Coursework Introduction "An experiment to see the effect of chunking on short-term memory recall". Many psychologists studying memory suggest that there are different stages through which information must travel if it is to be remembered. According to Atkinson and Shiffrin (1968) there are three kinds of memory storage and these vary according to their function and the length of time information is retained. Sensory memory is the first storage. This refers to the initial momentary storage of information, which lasts only a short time. It is recorded by the persons sensory system as a raw non-meaningful stimulus. Short-term memory is the next storage. This can last from around 5 to 15 seconds. The difference between this stage and the sensory stage is that here the information is stored in terms of its meaning rather than as mere sensory stimulation. Repetitive rehearsal would retain the information in short-term memory for longer. The third type of storage is long-term memory. Here information is relatively permanent although it may be difficult to retrieve. Continual rehearsal would be needed here if the information were to be stored for a long time. However, it is said that sometimes the brain does not forget certain things such as a language; even without rehearsal people seem to remember languages for long periods of time. For this coursework I am going to be concentrating on short-term memory, i.e. the effects of chunking on short-term memory recall. Chunking refers to a process by which information committed to memory is restructured. The term was first used by George Miller in a famous 1956 review paper entitled " The magical number seven, plus or minus two: Some limits on our capacity for processing information. " Miller discussed a memory span experiment conducted by S. Smith. Smith, measured the span of immediate memory for strings of binary digits (e.g. 110010110) and found the span to be about the same as for decimal digits. ...read more.

When told to stop memorising, turn the paper over and straight away start recalling as much as you can. You will have 30 seconds to do this and then be told to stop. Stop straight away, turn your papers over and put your pens down." After these instructions were given I asked all the participants if they understood the instructions clearly so as to avoid confusion. I then started the experiment. After the first test was done and the results were collected in I repeated the procedure explaining that they should repeat what they did with a different word list. The word list firstly given to one group was given to the other and vice versus. The papers were then collected in and the students were debriefed on what they were tested on and what we were looking for. This debrief consisted of "This experiment was testing short-term memory and the effects of chunking. You were tested on, un-chunked words, and chunked words. Thank you for taking part" After this they were asked a series of questions to help reduce the number of participant variables. Did you have any breakfast this morning? Has anyone had a late night and feel they didn't get enough sleep? Did anyone drink any caffeine? Controls Situational controls These were controlled so that nothing distracts the participants or affects the results. A "Do Not Enter" sign was placed on the door to make sure that no ones entered the room and interrupts the experiment. The experiment was done in the middle of the day. This makes sure that the participants are alert and capable of doing the test. This also ensured that the amount of light in the room is sufficient to read the data. The door will be shut during the experiment as to keep out as much noise as possible, and the room used was detached from the building so there was less noise from the other students. ...read more.

This is shown in the results as the results range from six to nine letters or numbers remembered. Miller also said that the amount of information that can be retained in the short-term memory can be increased through chunking and this is shown in my experiment because in Test A some people remembered up to all 10 chunks of information when they were chunked. I also discussed in the background research how Herbert Simon found that if he presented himself with a list of words and found he could not recall them properly after just one presentation unless they were chunked. This is also shown in my experiment because due to chunking the participants found it increasingly easier to remember the chunked words compared to the un-chunked words. De Groot also found that chunking affects the short term memory when related to chess players. I believe this can be related to my experiment because Generalisation Of Findings The experiment was done on a very small age group from 16-18 so it would be hard to generalise to younger children and also to adults or elderly people. This is because the results may vary depending on the age range. The participants were from different ethnicities and genders so you can generalise to them. This means that the results cannot be generalised to the larger population. Application of Study to Everyday Life You can apply this study to everyday life situations. For example if you looked up a phone number in the telephone book and you didn't have a pen so you had to remember it long enough to type it into the phone, you might chunk the numbers together to make it easier to remember. This would be chunking. Another example in a real life situation would be that sometimes people have trouble remembering how to spell words so they chunk the words together to make it easier to remember. For example, to spell 'altogether' you could chunk it into four words. 'All', 'to', 'get', 'her'. This would be another example of chunking. ?? ?? ?? ?? 1 ...read more.