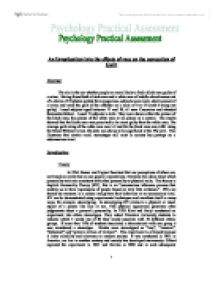 An Investigation into the effects of race on the perception of Guilt.

An Investigation into the effects of race on the perception of Guilt Abstract The aim is the see whether people are more likely to find a black man guilty of a crime. Having found both a black man and a white man of middle attractiveness out of a choice of 10 photos picked from magazines, subjects were read a short account of a crime and rated the guilt of the offender on a scale of 0 to 10 (with 0 being not guilty). I used subjects aged between 11 and 18, all were Caucasian and attended Sevenoaks School. I used 75 subjects in total. They were shown either the picture of the black man, the picture of the white man or no picture as a control. The results showed that the black man was perceived to be more guilty than the white man. The average guilt rating of the white man was 5.2 and for the black man was 6.98. Using the Mann-Whitney U test, this data was shown to be significant at the 5% level. This illustrates that certain racial stereotypes still exist in society but perhaps on a subconscious level. Introduction Theory In 1954 Bruner and Tagiuri theorised that our perceptions of others are not based on reality but on our general expectations. Everyone has ideas about which personality traits are consistent with other personality or physical traits. ...read more.

I asked every pupil I saw at both first break and lunch break over two days standing by the School Library. Procedure Preliminary experiment The attractiveness of 10 pictures of white men and 10 of black men (from magazines) were rated with 1 being the most attractive and 10 being the least. I calculated the mean attractiveness of each man and took the two men of middle attractiveness, one white and one black (Results are in the appendix). This ensured that attractiveness was not a variable in my final experiment. Main experiment Using the two pictures from my preliminary experiment, I prepared and read to all subjects the account of a crime and verbatim instructions (see appendix) asking subjects to rate the defendants guilt on a scale of 0 to 10 with 10 being definitely guilty and 0 being definitely not guilty. The account was a summary of a burglary. After this I either showed the subject no picture (25 subjects) as a control, the picture of a white man (25 subjects) or the picture of the black man (25 subjects). The subjects then rated the defendant's guilt. My control was to see how people rated the defendant without seeing a picture giving me an idea of how people perceive the account of the crime. Materials * Magazines - To collect pictures (see appendix) (Sunday Supplements from Sunday Telegraph) ...read more.

I did not seek permission from the people in the photos to take part in the study. It may be that they did not want to be involved in the experiment. Subjects were not debriefed as to the purpose of the experiment and have no idea of the results. Theoretical Implications My conclusion states that white people are more likely to find a black man guilty of a crime. This means that in a "multicultural" society racial stereotypes still exist whether this is at a subconscious or conscious level. People believe that a black man is more likely to commit a crime despite there being no evidence to prove that this is true. As Bruner and Tagiuri theorised in their Implicit Personality Theory, certain physical traits are associated with personality traits. There seems to be evidence to suggest that racial stereotypes exist, associating blacks which committing crimes as Katz and Braly discovered back in 1933. Some 70 years on, despite all human rights progress, racism exists. My study reinforces the investigation by the Howard League, which states that the British League system is biased against blacks. This creates issues when considering the validity of trial by jury. A majority white jury is more likely to convict a black man of a crime than they would a white man if they were tried for the same crime. These are rather sweeping statements to make on limited information. To draw such strong conclusions is impossible but my investigation, when added to others, casts enough of a shadow to warrant further investigation. 5 1 ...read more.