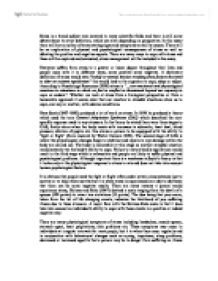 An outline of stress stating signs and symptoms as well as causes.

Stress is a broad subject area covered in many scientific fields and there is still some debate about its strict definition, which can alter depending on perspective. In this essay there will be an outline of stress stating signs and symptoms as well as causes. There will be an exploration of physical and psychological consequences of stress as well as debating the positive and negative aspects. There are many ways to cope with stress and these will be explored and evaluated, stress management will be included in the essay. Everyone suffers from stress to a greater or lesser degree throughout their lives and people cope with it in different ways, some positive some negative. A dictionary definition of stress would state "bodily or mental tension resulting from factors that tend to alter an existent equilibrium" this would lead to the organism to cope, adapt or adjust. According to Psychology Resources (2000) stress is "...our emotional and physiological reactions to situations in which we feel in conflict or threatened beyond our capacity to cope or endure". Whether we look at stress from a biological perspective or from a humanistic approach it seems clear that our reaction to stressful situations allow us to cope, one way or another, with adverse conditions. ...read more.

There are many different ways in which people try to cope with stress when it occurs over a prolonged period. One obvious solution is to remove the reason for the stressor or to get away from it. It is not always easy to avoid stress as this may lead to avoidance of responsibility which in turn could be problematic and create a more stressful outcome in the long term. Stress can be created from an overload of factors e.g. more and more tasks being given to a person at work while they also have a family live to cope with; or stress can derive from underload where frustration sets in when there is not enough to do. According to Cooper and Smith (1985) people at the bottom of hierarchies suffered more stress than those at the top. There tends to be two broad bands when it comes to coping strategies for stress, these are short term avoidance/denial methods and longer term realisation techniques. The short term methods can also have a negative effect on the body both mentally and physically. Overeating or comfort eating is one reaction to stress, sugary snacks raise blood sugar levels giving a person a feeling of satisfaction and increased energy levels ...read more.

The oral phase begins at birth and lasts eight months. It is characterized by the infant's concern for his mouth and gratification he feels from oral stimuli such as eating, sucking and biting. As a person feels more and more stress it could be stated that a desire for regression is stimulated, a need to return to a point where there was little responsibility and as such little pressure. Other ways in which people attempt to cope with stress is to go into denial or to procrastinate in an attempt to avoid the problem which is causing stress. Escapism is where a person will move from one situation to another in an attempt to make a fresh start and to leave unsolved problems behind. Projecting or displacing the blame for problems arising in the first place is another coping strategy when people refuse to take ownership for issues which cause stress. Sometimes people will falsely rationalise their behaviour blaming it on other issues rather than accepting the real reason for their bad temper or excessive smoking or drinking. All of these ways of coping with the negative feelings brought about by stress fail to deal with the causes and focus on denial of the facts or transference of feelings. Clearly these are negative and potentially unhealthy ways of coping with stress. ...read more.