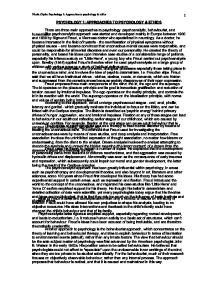 PSYCHOLOGY 1: APPROACHES TO PSYCHOLOGY & ETHICS There are three main approaches to psychology: psychoanalytic, behaviourist, and humanistic. The psychoanalytic approach was started and developed mainly in Europe between 1900 and 1939 by Sigmund Freud, a Viennese doctor who specialized in neurology. As a doctor, he became interested in the field of hysteria - the manifestation of physical symptoms without physical causes - and became convinced that unconscious mental causes were responsible, and could be responsible for all mental disorders and even our personality. He created the theory of personality, and based his ideas upon intensive case studies of a considerable range of patients, especially his infamous study on "Little Hans", a young boy who Freud carried out psychoanalysis upon. Bowlby (1946) applied Freud's theories when he used psychoanalysis on a large group of children with various ages on a study of habitual delinquency. The central emphasis is on dynamic, biological processes especially those taking place in the unconscious mind, and involves the idea of psychic determinism, i.e. Freudian slips. Freud said that we all have instinctual drives - wishes, desires, needs, or demands, which are hidden and suppressed from the consciousness because society disapproves of their open expression. Freud proposes three main components of the mind; the id, the ego and the superego. The id operates on the pleasure principle and its goal is immediate gratification and reduction of tension caused by irrational impulses. The ego operates on the reality principle, and controls the id in its reaction with the world. The superego operates on the idealisation principle, with norms and values of society being internalised. According to this approach, we all undergo psychosexual stages - oral, anal, phallic, latency and genital - which gradually motivate the individual to focus on the libido, and can be linked with the Oedipus complex. The libido is described as 'psychic energy' behind primary drives of hunger, aggression, sex and irrational impulses. ...read more.

This is probably because humanists deliberately take a less scientific approach to studying humans, since their belief in free will is in opposition to the deterministic laws of science, due to their idiographic approach, rather than producing generalised laws that apply to everyone. The issues they investigate, such as consciousness and emotion, are amongst the most difficult to objectively study. When psychologists carry out any research with humans or animals, they must justify their need for experimentation and refer to appropriate ethical guidelines. Research with animals can be used to benefit the animals themselves, e.g. to provide better zoo conditions or for the breeding of endangered species. It can also be used for protecting people and crops. For example, the medfly can be attracted away from devastating orchards by use of a pheromone usually used between medfly to attract mates. When it is not possible to study humans, animals can indicate possibilities and discover innate aspects of human behaviour. The transfer of findings from animal species to humans is plausible if we accept the principle of evolutionary continuity - differences between species are thought to be differences of quantity, not quality. Behavioural continuity is an idea borrowed from the theory of evolution from Charles Darwin (1809-1882), and psychologists have extended Darwin's idea of evolutionary continuity to include behaviour. They argue that by looking at species which are related to humans but less highly evolved, we can see human behaviour patterns in a simpler form. Much of the rigorously controlled experiments carried out on animals would not be permitted on humans due to ethical or legal reasons. These include interbreeding studies, deprivation, and brain and tissue research. Hubel and Wiesel (1962) used a cat to study how individual cells of the visual cortex responded to the input from the retina. Psychologists can also study the relative effects of heredity and environment on behaviour by selectively breeding animals and then rearing them in different environments. ...read more.

Psychologists should also ensure that animal suppliers are reputable and that they re competent to breed, house and transport the animals. If animals are to be trapped in the wild, this should be done as humanely as possible. If animals are confined, harmed, constrained or stressed in any way, psychologists must do all they can to ensure that the knowledge to be gained justifies the means of obtaining it. Alternatives to animal experiments should always be considered and trivial research should be avoided. It is illegal for experimenters to cause an animal pain or stress unless they have the relevant certificates and a Home Office licence. If experimenters are unable to find suitable alternative procedures they must ensure that stress and pain are minimised. A Home Office licence and relevant certificates are also needed before surgical or pharmacological procedures on animals are permitted. Researchers must be experienced and competent in surgical techniques and in the use of anaesthesia and analgesia. If an animal is judged to be suffering severely and enduring pain, euthanasia should be carried out. The famous study by Gardner and Gardner (1969) in to cognitive development used an ape called Washoe. This involved the use of a rare and precious animal for an experiment that did not really provide any great benefit to humans or animals. The ape was kept in captivity rather than being in the wild, and could also never be returned to nature after being with humans for so long. This poses questions regarding ethics, and also the welfare of the ape once the study was over and funding ceased. It is difficult to class some psychological research as unethical, as the ethical guidelines that were present at its time were not as strongly developed, or in some cases were totally absent. Some of the work was ground breaking in its importance, and the researchers had no real idea what might happen. Some also did follow-up studies to check if there were any long-term ill effects of participation in the research. 1 Nicola Glyde: Psychology 1: Approaches to psychology & ethics ...read more.