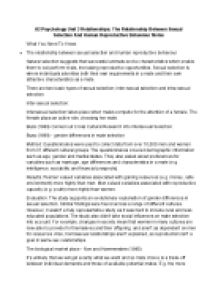 ﻿A2 Psychology Unit 3 Relationships: The Relationship Between Sexual Selection And Human Reproductive Behaviour Notes What You Need To Know: * The relationship between sexual selection and human reproductive behaviour Natural selection suggests that successful animals evolve characteristics which enable them to out-perform rivals, increasing reproductive opportunities. Sexual selection is where individuals advertise both their own requirements in a mate and their own attractive characteristics as a mate. There are two basic types of sexual selection; inter-sexual selection and intra-sexual selection. Inter-sexual selection: Intersexual selection takes place when males compete for the attention of a female. The female plays an active role, choosing her mate. Buss (1989) Carried out Cross Cultural Research into Intersexual Selection. Buss (1989) - gender differences in mate selection Method: Questionnaires were used to collect data from over 10,000 men and women from 37 different cultural groups. The questionnaires covered demographic information such as age, gender and martial status. They also asked about preferences for variables such as marriage, age differences and characteristics in a mate (e.g. intelligence, sociability and financial prospects). Results: Women valued variables associated with gaining resources (e.g. money, safe environment) more highly than men. Men valued variables associated with reproductive capacity (e.g. youth) more highly than women. Evaluation: The study supports an evolutionary explanation of gender differences in sexual selection. Similar findings were found across a range of different cultures. ...read more.

where there is sex with multiple partners. Males protect their investment in females carefully, ensuring that theirs is the only sperm to reach the egg of the female. Male testis size Large testes evolved due to female infidelity rather than to fertilise widely, since large quantities of sperm would not be needed if females could be trusted. Evidence: * The more sperm competition, the larger the testes relative to body weight. * Humans have less sperm competition than chimpanzes so have evolved smaller testicles, producing fewer sperm. Sperm allocation: Where there are lots of opportunities to copulate, being economical with sperm increases the chance of reproducing, as the amount of sperm available decreases with each copulation. Evidence: * In species with more females than males, there is less sperm in each ejaculate, and where there are fewer females there is more sperm in each ejaculate. * Packer and Pusey (1983) - a male lion may copulate up to 100 times a day but only ejaculate a limited number of sperm each time. Female orgasm: Female orgasms are not necessary for conception. The contractions during orgasm help to pull the sperm nearer to the egg: this improves the chance of conception and ensures that males with best indicators of fitness are favoured. Study * Shackleford et al (2000) - The female orgasm is designed for discriminating male quality. * 388 US and German heterosexual females in committed relationships responded to a questionnaire about their partner and relationship. ...read more.

2. Evolutionary principles are the same for all animals - While this is indeed true, evolutionary principles often ignore or underestimate social and cultural factors. 3. The principal drive is to procreate - It is not for homosexuals. How does evolution explain the increase in, and indeed increased acceptance of, homosexuality? Also, many women choose not to have children. 4. Evolution just makes perfect sense - True. However, it is largely unfalsifiable. Often the theory is adjusted to fit any findings that do not agree with it, making it extremely difficult or impossible to falsify. 5. Females choose male mates on the basis of their economic resources - Not necessarily. Weiderman and Alllgeier (1992) say that this is a perfectly rational choice. Men tend to be richer than women! Evolution is very hard to test in controlled conditions and so we can never be sure whether alternative explanations like this are any better than the evolutionary explanation. 6. Infertile people should be disinclined to have sex. There is no point in doing so in terms of adaptation - Not true at all. Infertile people enjoy sex as much as, or more than, fertile people. In many cases they do not have the concern about whether their actions may result in unwanted pregnancies. 7. Women are more likely to be monogamous, certainly after reproducing, and they will choose older, more resource-rich males as partners - Not necessarily true. Women are often unfaithful, and often choose younger men than themselves. Men often choose older women even though they know they cannot provide them with young. ...read more.