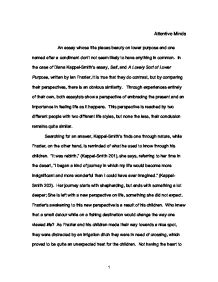 Attentive Minds An essay whose title places beauty on lower purpose and one named after a condiment don't not seem likely to have anything in common. In the case of Diana Kappel-Smith's essay, Salt, and A Lovely Sort of Lower Purpose, written by Ian Frazier, it is true that they do contrast, but by comparing their perspectives, there is an obvious similarity. Through experiences entirely of their own, both essayists show a perspective of embracing the present and an importance in feeling life as it happens. This perspective is reached by two different people with two different life styles, but none the less, their conclusion remains quite similar. Searching for an answer, Kappel-Smith's finds one through nature, while Frazier, on the other hand, is reminded of what he used to know through his children. "It was rebirth," (Kappel-Smith 201), she says, referring to her time in the desert, "I began a kind of journey in which my life would become more insignificant and more wonderful than I could have ever imagined." (Kappel-Smith 202). Her journey starts with shepherding, but ends with something a lot deeper; She is left with a new perspective on life, something she did not expect. Frazier's awakening to this new perspective is a result of his children. Who knew that a small detour while on a fishing destination would change the way one viewed life? ...read more.

(Kappel-Smith 204-205). Her perspective has now given her the identity as someone living for the moment, as she appreciates her environment and gives herself the opportunity to feel life more deeply. Frazier's identity has also become someone who wants to appreciate life in a deeper sense, but he discovers this want and goes about it in a different way than Kappel-Smith does. What Frazier wants is to not have to feel the need to have a set purpose for all that he sets out to do. He says "...we need margins." (Frazier 163), and what he means is that we need a place where we "can try out odd ideas that you might be afraid to admit to with people looking on." He wants to be able to be like he was as a kid, when he could do nothing and not feel guilty about his "blue-sky research". He has an interesting comment about this issue, that "Scientists have a term for research carried on with no immediate prospects of economic gain: 'blue-sky research.' Marginal places are the blue-sky research zones of the outdoors." If Kappel-Smith were to peer onto that last sentence, she would most likely agree to it, without a shadow of a doubt. If one were to find these two authors, given their present identities, in the same room, it wouldn't be far fetched to think that nothing short of agreements would be exchanged among them. ...read more.

(Frazier 162), specifically he writes about "a classic marginal, anything-goes sort of place" (Frazier 164) that he sees being destroyed. "On the far west side of the small western city where I live... is an open expanse of undeveloped ground... It is a classic marginal, anything-goes sort of place, and at the moment I prefer it to just about anywhere I know." (Frazier 163-164) He continues with examples of how versatile this undeveloped land is to the people of the city who utilize it. Now, the city has plans of building on this land, something Frazier has no embracing feeling towards. In closing his thoughts, he states, "The place's possibilities, which at the moment are approximately infinite, will be reduced to merely a few. And those of uncertain purpose will have to go elsewhere when they feel like doing nothing in particular, just fooling around." (Frazier 164) Frazier wants to avoid limitations, and with the city's plan of development, all he can see is the imagination being put under limitation. Even a limited imagination could see the similarities and differences brought forth in the essays, Salt, and A Lovely Sort of Lower Purpose. Through their own experiences, Diana Kappel-Smith and Ian Frazier have reached a very similar perspective in their life. Their idea of embracing the present and realizing the importance of feeling life as it happens is told in their own story, in their own way. 1 ...read more.