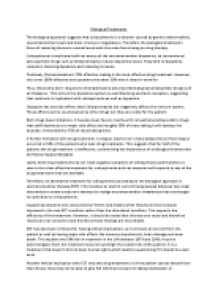 ﻿Biological Treatments The biological approach suggests that schizophrenia is a disorder caused by genetic abnormalities, neurotransmitter levels and brain structure irregulations. Therefore the biological treatments focus of restoring theses to normal levels with the main focus being on drug therapy. Schizophrenia is implicated with an excess of the neurotransmitter dopamine, so conventional anti-psychotic drugs such as Chlorpromazine reduce dopamine levels. They bind to dopamine receptors, blocking dopamine and reducing its levels. Positively, Chlorpromazine is 70% effective making it the most effective drug treatment. However, this is not 100% effective and questions the other 30% who it doesn?t work for. Thus, those who don?t respond to Chlorpromazine are prescribed atypical antipsychotic drugs such as Clozapine. ...read more.

Lastly, both drug treatments do not treat negative symptoms of schizophrenia and therefore is seen to be a less effective treatment for schizophrenia and not everyone will respond to any of the drug treatments that are available. Therefore, an alternative treatment for schizophrenia according to the biological approach is electroconvulsive therapy (ECT). This involves an electric current being passed between two scalp electrodes to create a seizure in attempt to realign neurotransmitter imbalances that are thought to contribute to schizophrenia. Supporting research was conducted by Therein and Adams when they found more people improved in the real ECT condition rather than the stimulated condition. This supports the efficiency of the treatment. ...read more.

Overall, the biological approach clearly favours the nature side of the nature-nurture debate. Because not everyone responds to biological treatments perhaps there are other factors into play such as the environment. Similarly, this approach only focusses on biology and not cognitive or behavioural explanation which makes this reductionistic because it sees us as a product of our biology. Lastly, treatments can be considered deterministic because it ignores psychological treatments such as CBT which doesn?t suggest everything is determined. In conclusion, biological treatments can be criticised for treating the symptoms not the cause and therefore a more holistic approach should be considered looking at treating causes not the symptoms. ...read more.