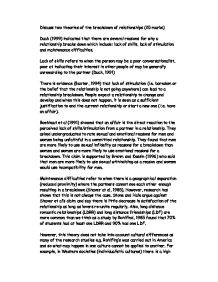 and long distance friendships (LDF) are more common than we think as a study by Rohlfind, 1985 found that 70% of students had at least one LDRR and 90% had one LDF. However, this theory does not take into account cultural differences as many of the research studies e.g. Rohlfing's was carried out in America and so what may happen in one culture cannot be applied to another. For example, in Western societies (individualistic cultures) there is a high degree of relationship choice and decide whether to end the relationship. The same cannot be said for collectivist cultures where ties to family and religion may play a role in holding a relationship together. Gender differences also need to be considered as men and women give different reasons for a break-up which has been proven by Boekhaut et al and Brehm and Kessin. ...read more.

However, as with a lot of relationship studies, this study was carried out on students who had not been in very long term relationships and so the results cannot be generalised to e.g. adults who have been married a long time with children. Also, ethical issues need to be considered when conducting such studies as the participant may experience distress when recalling the experience, as well as privacy and confidentiality looked at. A strength of this theory is that it can be used as marriage guidance to see at what stage the couple are at and find out what problems are occurring. However, this theory is largely descriptive in the sense that it only describes the stage of a breakdown and does not state why breakdowns occur. Duck (1999) suggested that they occur due to lack of skills, stimulation or maintenance difficulties. However, such explanations can only be applied to short-term relationships in individualistic cultures. ...read more.

3* This essay demonstrates some knowledge and debate about some of the issues. Keep the structure simple with identifying theory, brief reference to research that backs up or refutes, and include individual differences, culture and gender. It is easier to compare two more different theories for example social exchange and evolutionary theories.