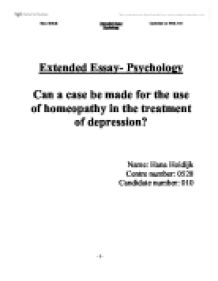 Can a case be made for the use of homeopathy in the treatment of depression?

Extended Essay- Psychology Can a case be made for the use of homeopathy in the treatment of depression? Name: Hana Holdijk Centre number: 0528 Candidate number: 010 Abstract: This essay describes depression and the various ways that it has been treated throughout the years. Statistics show that most people who have had severe depression in their life have a 50-80% chance of it returning. The side effects of modern drugs used to treat various diseases are extremely unpleasant. Research shows depression treated with psychotherapy does not prove to be very successful. It is also very hard to assess the effectiveness of psychotherapy and many people are rarely cured from depression. Homeopathy offers a safer, viable alternative to psychotherapy and drug treatment. It has no side effects and cures on a deeper level, preventing the patient from having a relapse later on. If it works, the effect is a long term curative one. If not, the palliative effect it creates is not harmful in any way. In this essay, the basic principles and method of treatment of homeopathy are discussed to try and enlighten the reader with an alternative form of healing. Homeopathy has become increasingly popular throughout the world because of the success rate it has with patients suffering from all kinds of diseases. I was inspired to write this paper because as the daughter of two homeopaths, I am able to see the terrible side effects that drugs have on patients, and am also there to see the majority of my parents' patients cured by homeopathy. A case can be made for the use of homeopathy in the treatment of depression because of the success it has in doing so compared to that of modern psychotherapy. 3.1Thesis: Modern psychological and psychiatric treatment of depression often involves chemical solutions to psychological problems which may or often may not be very effective, in addition to causing unpleasant side-effects including addiction to the substances themselves. ...read more.

4.1 Basic principles: There are three basic principles of Homeopathy. The similar principle, potentisation, and individualisation. Similia similibus curentur, or "Let likes be cured by likes" is what the founder of homeopathy, Samuel Hahnemann, proclaimed as the universal law of healing with medicinal substances. Homeopathy uses medicine or physical agencies to reproduce or imitate the symptom-picture of an illness. In 1790 Hahnemann was experimenting with Peruvian Chinchona, the source of Quinine used to treat malaria. He decided to take a dose of the bark and soon felt cold, numb, and drowsy, with thirst prostration and aching bones. He immediately recognised that these were the symptoms of malaria and thus assumed that was the reason it was successful in the treatment of that condition. After the dose wore off he tried it two or three times just to be sure he experienced the same results. He began to investigate other medicines on himself, his colleagues and his students in the same way he experimented with the Chinchona. After recording the results he found that12. 1. each medicinal substance produces a distinctive combination of signs and symptoms in healthy volunteers and 2. that medicines whose symptom pictures most likely match the illness to be treated are the ones most likely to initiate a curative response, by a virtue of that correspondence.13 4.2 similar principle: The outward signs of illness represent the automatic self-healing mechanism at work, in which case the similar remedy would need only to assist and strengthen such efforts to lead them to their proper conclusion. The challenge in homeopathy is to pick one substance from nature that truly matches the patient's symptoms. Rather than giving many different drugs to a patient, a homeopath gives one single remedy that is individualised according to the patient's pattern of disease. "Homeopaths treat the patients not the disease"14. The similar principle is also known to modern medicine. ...read more.

The single remedy is selected to cover the whole picture of the person since it is the whole person who is sick, not just one part. The homeopath sincerely seeks to understand the uniqueness of the patient. Homeopathic case-taking involves taking all aspects of the psychosomatic into consideration. Homeopathy is very different from psychology because it takes into consideration physical symptoms as well as the emotional symptoms of a patient. "Homeopathy perceives that there is one soul [psyche] in one body and from this it naturally follows that there is only one core problem at any one time and therefore only one healing intervention, one remedy, is needed, to create a curative action"24. In the same way that provings define each remedy as the unique ensemble of signs and symptoms that it can produce in healthy people, homeopaths define illness as the totality of observable responses that is equally characteristic of the patient. As the true reflection of the inner state, the overall symptom-picture becomes the chief goal of the clinical examination of the patient, and of the search for the remedy that best matches it25. Every person has a remedy that suits them. When the symptoms are all put together, one remedy is chosen that fits the symptom picture very closely. 13. Conclusion: Homeopathy seems to be more widespread now than ever because of its clinical success with patients. It seems to offer safer option than conventional drug therapy and is more cost effective because if the right remedy is chosen, the patient will not have to take it again. Patients and doctors need to be informed that there may be an alternative to conventional drug therapy especially in cases where such interventions either do not work or do not harm by creating severe physical side effects or drug or therapist dependency. Based upon the above, it does seem that there is a case for including homeopathy in the range of treatments available for depression and perhaps even as the major form of treatment. ...read more.