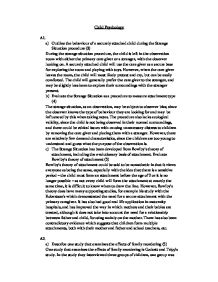 Child Psychology A1. a) Outline the behaviour of a securely attached child during the Strange Situation procedure (3) During the strange situation procedure, the child is left in the observation room with either the primary care giver or a stranger, with the observer looking on. A securely attached child will use the care giver as a secure base for exploring the room and playing with toys. However, when the care giver leaves the room, the child will most likely protest and cry, but can be easily comforted. The child will generally prefer the care giver to the stranger, and may be slightly less keen to explore their surroundings with the stranger present. b) Evaluate the Strange Situation as a procedure to measure attachment type (4) The strange situation, as an observation, may be subject to observer bias; since the observer knows the type of behaviour they are looking for and may be influenced by this when taking notes. ...read more.

A2. a) Describe one study that examines the effects of family reordering (5) One study that examines the effects of family reordering is Cockett and Tripp's study. In the study they interviewed three groups of children, one group was children from re-ordered families, in which the child no longer lived with one (or both) biological parents; the second group consisted of children from families suffering serious discord, but which were still intact, and the third group was a control group of children from intact families suffering no discord. The children were interviewed and assessed on their academic success, emotional well-being, cognitive development and behaviour. The researchers found that the children from families suffering discord were the worst performers academically and their overall social and cognitive development was the worst, whereas children from re-ordered families seemed to have adjusted quite well to the change, although very few admitted that they were expecting the split. ...read more.

A3. Describe and evaluate research into popularity of individual children (12) - Dodge et al - observed 5 year olds in a school playground to see whether there are behavioural differences in children. Observed in pairs, and then third child would be observed as they tried to join in the games. Popular children = watched, then made comments and were gradually accepted. Rejected = generally too shy to comment and join in, stood and watched. Neglected = disruptive, naughty and shunned by other children. Conclusion = behavioural differences are present in children. - Evaluation = Issue of self-fulfilling prophecy - children may be unpopular because they are assumed to be, because they're shy etc. Can't generalise, only one playground of 5 years olds. Also ethnocentric, popularity and behaviour may be different in other cultures. High ecological validity - naturalistic experiment. Few demand characteristics as children very young. Because of SFP could be an issue with ethics? Could cause upset in children because they are shunned by others. ...read more.