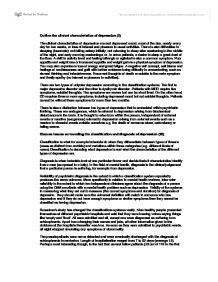 Classification and Diagnosis of Depression

Outline the clinical characteristics of depression (5) The clinical characteristics of depression are sad depressed mood, most of the day, nearly every day for two weeks, or loss of interest and pleasure in usual activities. There is also difficulties in sleeping (insomnia); not falling asleep initially; not returning to sleep after awakening in the middle of the night, and early morning awakenings; or, in some patients, a desire to sleep a great deal of the time. A shift in activity level and feeling lethargic or agitated is also a common symptom. Poor appetite and weight loss or increased appetite and weight gain is a physical symptom of depression. You may also experience loss of energy and great fatigue. A negative self concept, self blame and feelings of worthlessness and guilt with further evidence being difficulty in concentrating, such as slowed thinking and indecisiveness. Recurrent thoughts of death or suicide is the main symptom and finally apathy (no interest or pleasure in activities). There are two types of unipolar depression according to the classification systems. The first is major depressive disorder and the other is dysthymic disorder. Patients with MDD require five symptoms, suicidal thoughts. The symptoms are severe but can be short lived. On the other hand DD requires three or more symptoms, including depressed mood but not suicidal thoughts. ...read more.

We need to consider the difficult position that the clinicians were placed in, since the consequences of sending someone away who might be seriously mentally ill is likely to be much worse than the repercussions of admitting someone into hospital who turns out to be mentally well. This study is based on schizophrenia but demonstrates how unreliable the DSM is overall in diagnosis so a study for depression could be similar e.g. All patients saying they have suicidal thoughts would be similar in results and doctors could not turn them away. Davison outlines that issues with classification systems are specifying a particular number of symptoms from a longer list that must be evident before a particular diagnosis can be made. For example, DSM-IV-TR(2000) insists on depressed mood plus 4 other symptoms to be present to diagnose MDD. But why four? This has been increased to five in 2010. Why five? There is still room for subjectie interpretation on the part of the psychiatrist. For example the DSM requirews comparison between the patient and an 'average person'. These examples beg all sorts of questions. As Davison (2004) argues 'such judgements set the stte for the insertion of cultural and gender biases as well as the clinicians own personal ideas of what the 'average person' should be doing at a given stage of life. ...read more.

For example, it is more acceptable for women to admit to the kinds of symptoms that characterise depression than men, and women may feel more willing to go and ask for help. Culture is another factor because one key difference across cultures is the emphasis a particular society places on physical symptoms as a means of expressing mental problems. People from eastern cultures, in particular, often express their distress through physical symptoms. Kua et al reported that 72% of people in China who first presented with chest or abdominal pains or headaches were later fonud to have a mental health problem. One reason that people do not mention emotional symptoms when they first present for treatment is the stigma associated with emotional or mental weaknesses, especially in eastern cultures. Finally; the effect of socio-cultural background means that people from social minorities seem to have a higher level of mental health probles than others. It is not clear whether this reflects greater genetic vulnerability, psycosocial factors associated with being part of a minority group or misdiagnosis. It could, for example, be the case that clinicians from a white middle class background misinterpret cultural differences in behaviour and expression as symptoms of mental disorder. If this is the case, it demonstrates how important it is for clinicians to take particular care in their assessment of people from different ethnic or social groups when diagnosing depression. ...read more.

The writer has covered the essay title and has not got sidetracked. It is brief but concise and it has covered most aspects of depression other than 'bi-polar' or 'manic depression'. If the writer takes on the comments made then this essay score could improve significantly. Better referencing and more detail about depression and its different forms would be advisable.