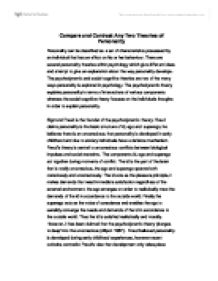 Compare and Contrast Any Two Theories of Personality

Compare and Contrast Any Two Theories of Personality Personality can be described as a set of characteristics possessed by an individual that has an effect on his or her behaviour. There are several personality theories within psychology which give different ideas and attempt to give an explanation about the way personality develops. The psychodynamic and social-cognitive theories are two of the many ways personality is explored in psychology. The psychodynamic theory explains personality in terms of interactions of various components whereas the social-cognitive theory focuses on the individuals thoughts in order to explain personality. Sigmund Freud is the founder of the psychodynamic theory; Freud claims personality is the basic structure of id, ego and superego, he believes there is an unconscious; that personality is developed in early childhood and due to anxiety individuals have a defence mechanism. Freud's theory is central to unconscious conflicts between biological impulses and social restraints. The components id, ego and superego act together during moments of conflict. ...read more.

During the phallic stage pleasure is sought on the genitals and the child has to deal with incestuous feelings. The latency stage focuses on hidden sexual feeling and lastly the genital stage concentrates on growing sexual interest. Freud also believed that during the phallic stage boys develop sexual desires towards their mother and develop jealousy and hatred towards their father because he is considered a rival. The boy also experiences the feeling of guilt and a fear of punishment from the father, this process was named the Oedipus complex. However, it is believed that Freud may have disbelieved childhood sexual abuse of his patients and interpreted as childhood sexual desires. Freud said after a certain amount of time the child represses his feelings and decides to become like the rival parent; the identification process provides the child with gender identity, however, nowadays it is believed gender identity is gained earlier than the Oedipus complex and gender can be developed without the same-sex parent present. ...read more.

Another theory of personality is the social-cognitive theory. This is a theory that emphasises processes of the individual's thoughts. Albert Bandura highlights the interaction between a person's thinking and their social context. The humanist theory offers an alternative to the psychodynamic theory. The approach emphasises on human potential and on observing situations from the perspective that is not of the researcher's. It also states that no definite factors determine human behaviour therefore personality; Abraham Maslow and Carl Rogers were supporters of this view. They disagreed with the Freudian psychodynamic ranks. Maslow made the claim that individuals are motivated by a hierarchy of needs; once each need is achieved the process of fulfilling one's potential is complete, this potential describes an individuals personality. Rogers' concept of personality is based on an individuals need for self-actualisation and unconditional positive regard. In contrast, the psychodynamic theory would view the individual's needs as of a sexual nature and that fulfilment of the sexual desires is all personality is. ...read more.

This essay is rather more like an early draft of an answer than the final essay as much of the material is describing detail of Freud's theory without much reference to the question.There is some reference to Maslow's hierarchy of needs with some AO2 attempts but mainly with little attempt to give evidence. Reference to case studies and small samples, even if based on people well known to the therapist (Freud), can help a debate about the scientific status of each theory. Both theories lack scientific status due to their approaches to research. Contrasts between these theories could include unconscious vs. conscious