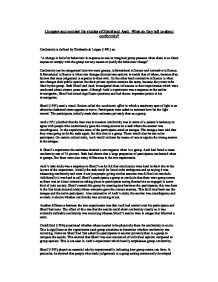 Compare and contrast the studies of Sherif and Asch. What do they tell us about conformity?

Compare and contrast the studies of Sherif and Asch. What do they tell us about conformity? Conformity is defined by Zimbardo & Leippe (1991) as: "A change in belief or behaviour in response to real or imagined group pressure when there is no direct request to comply with the group nor any reason to justify the behaviour change" Conformity can be categorised into two main groups, informational influence and normative influence. Informational influence is when one changes their private opinion to match that of others, because they believe that ones judgement is superior to their own. On the other hand normative influence is when one changes their public opinion but their private opinion remains the same, because they want to be liked by the group. Both Sherif and Asch investigated these influences in their experiments which were conducted about sixteen years apart. Although Asch's experiment was a response to the earlier investigation, Sherif had raised significant questions and had shown important points in his investigation. ...read more.

Sherif created this group by creating trust between the participants; this was done in the first trials (neutral trials) where everyone gave the correct answers. This built trust between the stooges and the na�ve participant. Also contrastive of Asch's study, the answer was unambiguous and so made it elusive whether conformity was occurring or not. Another difference between the two experiments was that Asch had control over his participants and Sherif had none. The effect of this was that the results could show conformity clearly as it was evidently definable conformity was occurring whereas Sherif's results were in ranges that followed a norm. Crutchfield (1954) questioned whether others needed to be physically there for conformity to occur. This is significant as the experiments used group situations to determine whether conformity was occurring. However Sherif had first asked his participants to answer privately then in a group to compare the results. This showed that Sherif was also concerned of individual opinion compared to group opinion. ...read more.

However Asch's findings had shown much more clearly the factors affecting conformity and so had produced variables into the situation which controlled the amount of conformity taking place. Sherif's experiment was the first to create this idea of group norms and Asch later extended Sherif's work by drawing better conclusions from his own studies. Neither of the experiments had taken into consideration social role and it being an influencing factor. Asch's study has shown that the conformity level is quite high. 'The results reveal the tremendous impact of an "obviously" correct but unanimous majority on the judgements of a lone participant' (van Avermaet (1996)) The findings from both experiments show that conformity occurs for two reasons, normative influence and informational influence. Participants conformed either because of internalisation or compliance. But this idea can be argued against with the self-categorisation approach. The idea being that if we believe that there is a correct answer and we are uncertain what it is, then only those whom we categorise as belonging to 'our' group will influence our judgements. As can be seen Asch and Sherif's studies have drawn many conclusions and raised even more questions in why conformity does occur. ...read more.