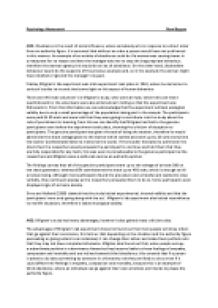 Comparing Experiments into Obedience and Conformity

﻿Psychology Homework Rem Begum AO1: Obedience is the result of social influence, where somebody acts in response to a direct order from an authority figure. It is assumed that without an order a person would have not performed in this manner. An example of an activity of obedience could be if a woman was causing havoc in a restaurant for no reason and then the manager asks her to stop the inappropriate behaviour, therefore the woman agrees; this would be an act of obedience. On the other hand, disobedient behaviour would be the opposite of the previous example and, so in the example the woman might have rebelled or ignored the manager?s request. Stanley Milgram?s lab experiment was a lab experiment took place in 1963, where he carried out a series of studies to try and shed some light on this aspect of human behaviour. There were 40 male volunteer?s in Milgram?s study, who were all male, which tells one that it was Endocentric, the volunteers were also all American?s telling us that the experiment was Ethnocentric. ...read more.

Orne and Holland (1968) claimed that the study lacked experimental, internal validity and that the participants ?were only going along with the act?. Milgram?s lab experiment also lacked resemblance to real life situations, therefore is lacked ecological validity. AO2: Milgram?s study had many advantages; however it also gained many criticisms also. The advantages of Milgram?s lab experiment shows he found out that most people will obey orders that go against their conscience, this tells us that depending on the situation and the authority figure persuading or giving orders to an individual, it can change their action and make them perform acts that they may not have completed otherwise. Milgram also found out that, when people occupy a subordinate position in a dominance hierarchy they become liable to those feelings of empathy, compassion and mortality and are inclined towards blind obedience: this unravels that if a person is asked to do obey something by someone in a hierarchy role they are likely to do so even if it could affect their feelings is empathy, ...read more.

Hoffling?s study concluded with 21 out of 22 nurses obeying to give the drug. However Hoffling?s experiment was in a natural hospital environment and therefore supported ecological validity, whereas Milgram?s experiment was not set in a natural environment, therefore it could be argued that Hoffling may have achieved more accurate results on obedience. On the other hand Hoffling?s research had a few criticisms also, as the nurses were not allowed to naturally discuss with each other about giving the drug, also the Doctor in the experiment was unknown. Contrary to this Rank and jacobson?s Field experiment concluded that nurses are aware of the toxic effects of a drug and were allowed to interact naturally, therefore they will not give an overdose of the medication just because a doctor/physician orders it. 2 out of 18 nurses obeyed, which displays a large difference from Hoffling?s and Milgram?s obedience rates. The drug in Rank and Jacobson?s experiment was a known drug and the nurses could interact and discuss naturally. As a result I feel that rank and Jacobson?s experiment was the most ecologically valid, due to the conditions they were in. ...read more.