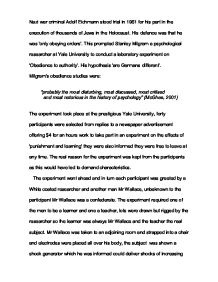 Nazi war criminal Adolf Eichmann stood trial in 1961 for his part in the execution of thousands of Jews in the Holocaust. His defence was that he was 'only obeying orders'. This prompted Stanley Milgram a psychological researcher at Yale University to conduct a laboratory experiment on 'Obedience to authority'. His hypothesis 'are Germans different'. Milgram's obedience studies were: "probably the most disturbing, most discussed, most critised and most notorious in the history of psychology" (McGhee, 2001) The experiment took place at the prestigious Yale University, forty participants were selected from replies to a newspaper advertisement offering $4 for an hours work to take part in an experiment on the effects of 'punishment and learning' they were also informed they were free to leave at any time. The real reason for the experiment was kept from the participants as this would have led to demand characteristics. The experiment went ahead and in turn each participant was greeted by a White coated researcher and another man Mr Wallace, unbeknown to the participant Mr Wallace was a confederate. The experiment required one of the men to be a learner and one a teacher, lots were drawn but rigged by the researcher so the learner was always Mr Wallace and the teacher the real subject. ...read more.

It is important to note that Milgram couldn't have predicted that outcome before the experiment as he didn't know them and he didn't conduct any research on the participants background before the experiment. One of the fiercest critics of Milgram's work was Baumrind (1964) claiming the experiment lacked ecological validity as the laboratory setting was too artificial, also the unfamiliar setting caused uncertainty in the participants which in turn would lead to more obedience. The claim that the laboratory setting and lack of realism influenced the results was shown to be incorrect when an experiment was conducted at a real hospital by Hofling et al(1966). A doctor who was a confederate spoke by telephone to a nurse and asked her to issue double the recommended dose of a drug to a patient, the doctor then stated he would sign the relevant papers later. Although this was strictly against hospital rules twenty one out of the twenty two nurses asked were ready to administer the medication without questioning the doctor. This illustrates how obedience in easily found in real life situations and establishments. It is however the social norm of nurses to issue drugs to a patient and at the time of the experiment they would have felt uncomfortable to question a doctors authority. ...read more.

He was a pioneer in conducting experiments on obedience and his work moved the study of Psychology further forward, as well as this he influenced others to conduct further experiments. The experiment also prompted many discussions on ethics and in 1978 ethical guidelines were introduced for research on human subjects. Researchers now have to have informed consent and explain in full the purpose of the experiment and the hypothesis. Identities must also remain confidential. Ironically the discussions on ethics bought about by Milgram's experiments are now used against him to criticise him and his work. The experiment whilst providing valuable information on obedience rejected his original hypothesis as Germans are no different to anybody else as Milgrams and other studies have discovered that obedience to someone perceived to be in authority is high in many parts of the world. However there were other possible reasons why Eichmann could have acted the way he did, which couldn't be tested in experiments. He may have feared for his own life had he not obeyed the orders. Since birth humans are bought up to obey orders, to develop morals and do as we are told. It is an evolutionary mechanism so a stable society can be maintained and this makes it possible to be able to function in a hierarchical society. ...read more.