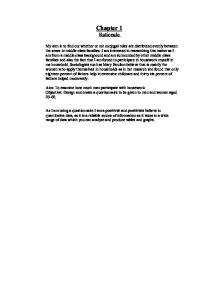 Chapter 1 Rationale My aim is to find out whether or not conjugal roles are distributed evenly between the sexes in middle class families. I am interested in researching this matter as I am from a middle class background and am surrounded by other middle class families and also the fact that I am forced to participate in housework myself in ms household. Sociologists such as Mary Boulton believe that is mainly the women who apply themselves in households as in her research she found that only eighteen percent of fathers help in extensive childcare and thirty six percent of fathers helped moderately. Aim: To examine how much men participate with housework. Objective: Design and create a questionnaire to be given to men and women aged 20-60. As I am using a questionnaire I am a positivist and positivists believe in quantitative data, as it is a reliable source of information as it takes in a wide range of data which you can analyse and produce tables and graphs. Chapter 2 Context and Concepts Ann Oakley criticises other sociologist's research as she does her own. I have chosen her study because she also was trying to find the truth about conjugal roles as she felt the other sociologists hadn't given accurate accounts. She says that although the figure of 72% of men doing housework is impressive she points out that this figure is based on one research question "do you/your husband help at least once a week with house hold jobs such as washing up, making beds, ironing, cooking or cleaning?" She also notes that men who make a very small contribution to the housework would also be included in this figure. She as a feminist believes that the nuclear family exploits women as a cheap army of labourers and that even when women are in an employed area of work they are paid poorly and less than men. ...read more.

Most of my samples were taken from middle aged adults between the ages of 40 and 50. From this graph you can see that mostly the men are primary earners in nuclear families. I can see from this chart that men even now are still the primary earners but since Ann Oakleys and Mary Boultons time I can infer that many more women have taken up the role of the primary earner and are focusing on their careers rather than being the ideal housewife. This graph also relates to the next graph on the financial decisions made in a household. The two graphs on Financial Decisions and Primary Earners indicate through similarity that the people in a family who earn the money are the people who decide where it goes. Again as more women are becoming more economically independent with their careers they have a greater input into the household and make more financial decisions. In these two graphs men are taking to their gender specific roles as the breadwinners of the household. This graph we can also relate to the last two. Using the information this graph gives us we can infer that it is mostly the women that do the childcare in a relationship whether or not they are the primary earner in the household. To explain this information you can take into account that when women become child bearers they often halt there careers and spend time looking after their children whilst the men stay at work to support the family as they are the primary earners. From the previous pie charts you can start to see a pattern emerging. More men are working as the primary earners in a household and more women are at home taking care of children and doing household chores. So far women clean up more after meals and take care of the children far more than their male counterparts. The amount of men and women cleaning up after meals is just over half and half. ...read more.

From my results I have found that it is not such a large gap but 45% of men do house work compared to 60% of women. The second aim did surprise me as the result has not changed since Ann Oakley and Mary Boulton did their research. Since their research in the 70's and 80's Women are still doing more housework and childcare than men, and men are still doing their gender specific roles of being the primary earner and supporting the family and doing the D.I.Y and gardening. 'Despite a reduction of gender differences in the occupational world in recent years, one occupational role remains entirely feminine: the role of housewife. No law bans men from this occupation, but the weight of economic, social and psychological pressures is against their entry to it. The equation of femaleness with housewifery is basic to the structure of modern society...' a quote from Ann Oakley's book "The sociology of housework" published in 1974. From this quote you can see she admits that the gender differences in housework have been reduced but she says men due to economic, social and psychological pressures still don't do as much as women. My results confirm this more than 30 years later which I found surprising as I thought men were doing more around the house. Also our results I expected to be different because she interviewed women as her preferred method of research and I handed out closed question questionnaires to men and women. Interpretivism would criticise me for my method arguing it does not have verstehen and validity as is a closed question questionnaire. After analysing my results I found that only 45% of men did regular house work in comparison to 60% of women doing the same. Again this backs up Ann Oakley and Mary Boulton's work on conjugal roles. In conclusion I have found that little has changed with conjugal roles and house work and that woman are still doing the majority of the work at home. ...read more.