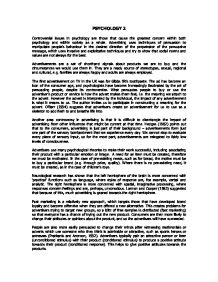 PSYCHOLOGY 2 Controversial issues in psychology are those that cause the greatest concern within both psychology and within society as a whole. Advertising uses techniques of persuasion to manipulate people's behaviour in the desired direction of the perpetrator of the persuasive message, which uses invasive and exploitative techniques and try to show that social norms and values are not always for the best. Advertisements are a set of shorthand signals about products we are to buy and the circumstances we would use them in. They are a ready source of stereotypes, sexual, regional and cultural, e.g. families are always happy and adults are always employed. The first advertisement on TV in the UK was for Gibbs SR's toothpaste. The ad has become an icon of the consumer age, and psychologists have become increasingly fascinated by the art of persuading people, despite its controversies. What persuades people to buy or use the advertiser's product or service is how the advert makes them feel, i.e. the meaning we attach to the advert. However the advert is interpreted by the individual, the impact of any advertisement is what it means to us. The author invites us to participate in constructing a meaning for the advert. O'Barr (1994) suggests that advertisers create an advertisement for us to use as a skeleton to add flesh to and breathe life into. Another area controversy in advertising is that it is difficult to disentangle the impact of advertising from other influences that might be current at that time. Hedges (1982) points out that to the consumers, advertising is just part of their background - advertisements form just one part of the sensory bombardment that we experience every day. We cannot stop to evaluate every piece of sensory input, so for the most part, advertisements are relegated to fairly low levels of consciousness. Advertisers use many psychological theories to make their work successful, including associating their product with a particular emotion or image. ...read more.

One possible reason, suggested by Wilder (1977) in Baron and Byrne (1984) is that the subjects begin to suspect collusion amongst the group members once the group goes beyond that number. If that is the case, then that suggests that the best way to influence a person would be to get them to receive the same message from a variety of independent small groups, rather than from a single large group. That seems also to fit with Noelle-Neumann's view that, as the interpersonal support for the deviant opinion decreases, so the deviant opinion will be weakened and the dominant opinion become even more dominant. Other experiments have also shown that social support can help us to resist conformity, even if the person giving us the support is not particularly competent and even if she doesn't share our views. It seems that any old support will do. However, the support is more likely to be successful if she is competent and does share our views. It also seems to be especially important that dissent, if it is to be effective, should be voiced early on in the proceedings. Some situations move beyond requests for action and entail direct orders from one person to another. Surprisingly, a demand for behaviour often results in obedience for many people, despite an authority figure's lack of power to enforce an order. The classic study of obedience to authority was conducted by Milgram in 1974, which involved leading subjects to believe they were administering shock to a person who was making errors in a learning experiment. Results of this study revealed that 65% of the subjects were obedient with the experimenters request to provide a shock at a level that was extremely painful and dangerous to the learner. Factors that seemed to contribute to this outcome include the authority figure's gradual escalation of the scope of their orders and their visual cues of power (e.g. ...read more.

Psychometric test results should ideally be used alongside other reliable information about a person, otherwise they may wrongly stereotype an individual. Furthermore, there are many cultural and sub-cultural issues that can arise when measuring IQ, which causes much controversy. At the extreme, IQ tests were used to keep out certain immigrant groups from the United States during the 1920's. Jenson (1969) suggested that genetic differences were the cause of consistently lower IQ scores observed in non white racial groups. Recent controversies relate to the systematic differences attained by different groups in society. Critics say these are the results of bias in test items. Typical examples relate to previously learned information and items using verbal information, typically English, which require reading and writing. Even when tests are translated to the native language of the participants, questions are still raised over the cultural equivalence of certain items (Zindi, 1994). Even tests which explicitly attempt to be culture fair have been questioned. The Raven's Progressive Matrices test showed that the performance of Asian immigrants has been found to improve over a five year period by an average of 15-20 points, which demonstrates that minorities will be disadvantaged in taking them until they learn different ways of approaching them (Roth, 1990). In 1972, Williams produced the Black Intelligent Test of Cultural Homogeneity (BITCH) in an attempt to highlight cultural biases in test items, which was heavily loaded towards black minorities. Using this test, it is black people who tend to score higher than whites. Particularly in IQ tests that use visual cues, participants may misinterpret an action, and their own cultural biases produce expectations which can alter what they 'see'. They may use methods derived from an alien culture (emics/etics) and may have a hostile reception which will bias their observations. Observations are made of a sample and may not be typical of the whole culture being studies. It is also wrong to imagine a culture as being a homogenous group of people; differences within a culture may be as large as those between cultures. ...read more.