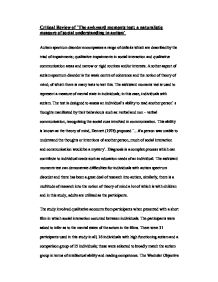 communication areas and narrow or rigid routines and/or interests. Another aspect of

mind; of which there is many tests to test this. The awkward moments test is used to

represent a measure of mental state in individuals; in this case, individuals with

autism. The test is designed to assess an individual’s ability to read another person` s

thoughts manifested by their behaviours such as: verbal and non – verbal

is known as the theory of mind, Dennett (1978) proposed `…if a person was unable to

understand the thoughts or intentions of another person, much of social interaction

and communication would be a mystery`. Diagnosis is a complex process which can

contribute to individual needs such as education needs of an individual. The awkward

moments test can demonstrate difficulties for individuals with autism spectrum

disorder and there has been a great deal of research into autism, similarly, there is a

and in this study, adults are utilized as the participants.

film in which social interaction occurred between individuals. The participants were

asked to infer as to the mental states of the actors in the films. There were 31

participants used in this study in all, 16 individuals with high functioning autism and a

comparison group of 15 individuals; these were selected to broadly match the autism

group in terms of intellectual ability and reading competence. The Wechsler Objective

write. Each participant took part in the awkward moments test; it involved being

question about a specific part of the film; questions inferring to their mental states.

The results showed that they supported the experimental prediction. The participants

used in the study were selected carefully; using tests a range of tests to determine IQ

scores of participants and controlling this by having a control group with similar IQ.

Theory of mind tests and IQ tests showed a correlation between the control group, but

not in the autism group, however previous studies (e.g., Happé, 1995; Sparrevohn &

disorder using a number of tests, the main test being the awkward moments test. The

main test is demonstrates a link between autism and the theory of mind. Simon Baron

marble into a basket, once out of the room the other doll places the marble into

another container. The child is asked where will the first doll look for her marble and

has developed theory of mind or not. Tests like these are specifically designed to test

of mind was proposed. These areas include mental state language words like `think`,

`know`, `believe` in speech, they also have great difficulty understanding or engaging

in deception. With this in mind, it is difficult to conduct tests on individuals with

autism spectrum disorder. A question that arises from study is how do these findings

Although the study uses participants with a range of autism spectrum disorders; it

does not fully account for others with more debilitating autism spectrum disorders,

however it does give some valuable insight into theory of mind of individuals. An

different aspect to the autism spectrum. It is noted that there is a genetic possibility as