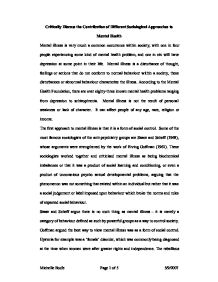 Critically Discuss the Contribution of Different Sociological Approaches to Mental HealthMental illness is very much a common occurrence within society, with one in four people experiencing some

Critically Discuss the Contribution of Different Sociological Approaches to Mental Health Mental illness is very much a common occurrence within society, with one in four people experiencing some kind of mental health problem, and one in six will have depression at some point in their life. Mental illness is a disturbance of thought, feelings or actions that do not conform to normal behaviour within a society, these disturbances or abnormal behaviour characterize the illness. According to the Mental Health Foundation, there are over eighty-three known mental health problems ranging from depression to schizophrenia. Mental illness is not the result of personal weakness or lack of character. It can affect people of any age, race, religion or income. The first approach to mental illness is that it is a form of social control. Some of the most famous sociologists of the anti-psychiatry groups are Szasz and Scheff (1968), whose arguments were strengthened by the work of Erving Goffman (1961). These sociologists worked together and criticised mental illness as being biochemical imbalances or that it was a product of social learning and conditioning, or even a product of unconscious psycho sexual developmental problems, arguing that the phenomenon was not ...read more.

It also fails to consider the powerful impact of a label. The second approach to mental illness is that it is constructed by society, maybe through the reactions that people have or stereo-type images that are seen every day through media and films or even something as simple as a label given to someone. Mental illness is socially constructed according to sociologist Thomas Scheff (1966) he argues that there is no such thing as mental illness; it is just bizarre behaviour that can not be explained through other means, such as drugs or alcohol. Goffman suggests that the process of becoming mentally ill is linked to the way that a person's presenting culture is stripped from them once they enter an asylum. Goffman believed that institutions for the mentally ill people were more likely to create than cure the problems. Once within the asylum the patients self image is taken away, they are then expected to conform by the asylum's rules, if they do not conform, then this person is seen as mentally ill and their self image is replaced with an institutionalised self concept. ...read more.

There are some positive points about this approach - by looking at the possible cause of a problem, it helps us to understand the social distribution of mental health, and it also develops a critical look at society so that we can maybe try to reduce mental illness. This approach does not go without criticisms because it fails to explain why upper class groups suffer; it only recognises the lower classes and ethnic minorities of society. Within this essay three approaches to mental illness have been covered, each trying to give a sociological explanation. The first two approaches do not except that there is such an illness, so then mental illness is explained through the process of labelling and social control each with its own theories as to why it happens. The third approach accepts mental illness is real and that it is not created by society or that it is a form of social control. As a real problem this approach looks at possible causes to mental illness, such as those being socially constructed through class and ethnicity. Whether mental illness is socially controlled, socially created or caused by society, it is a phenomenon that maybe all of the approaches contribute. ...read more.

3* This essays presents three approaches to defining mental illness and offers some considerations of their strengths as well as their limitations.