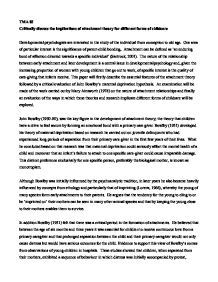 TMA 03 Critically discuss the implications of attachment theory for different forms of childcare Developmental psychologists are interested in the study of the individual from conception to old age. One area of particular interest is the significance of parent-child bonding. Attachment can be defined as 'an enduring bond of affection directed towards a specific individual' (Santrock, 2001). The nature of the relationship between early attachment and later development is a central issue in developmental psychology and, given the increasing proportion of women with young children that go out to work, of specific interest is the quality of care-giving that infants receive. This paper will firstly describe the essential features of the attachment theory followed by a critical evaluation of John Bowlby's maternal deprivation hypothesis. An examination will be made of the work carried out by Mary Ainsworth (1978) on the nature of attachment relationships and finally an evaluation of the ways in which these theories and research implicate different forms of childcare will be explored. John Bowlby (1930-80), was the key figure in the development of attachment theory; the theory that children have a drive to feel secure by forming an emotional bond with a primary care giver. Bowlby (1951) developed his theory of maternal deprivation based on research he carried out on juvenile delinquents who had experienced long periods of separation from their primary care giver in the first few years of their lives. ...read more.

and Tizard and Hodges (1978) caution that while children can be cared for and attached to more than one adult, having a large number of caregivers may have an adverse effect on their ability to develop close relationships. Bowlby's maternal deprivation hypothesis was further developed by the work of Mary Ainsworth (1969), who devised a method for observing and assessing the attachment behaviour babies' display towards their mothers/caregivers. This is known as the Strange Situation (ED209 TV4 programme) and is essentially a method for measuring a one year-old's attachment to its mother and assessing how the child reacts to separation and more importantly to reunion with its mother when placed in a slightly stressful situation. Briefly, the experiment involves taking mother and child to a strange room and observing the child's responses to the introduction of a stranger, the mother's departure, reunion with the mother, leaving the child alone for a few minutes in the room (most stressful event), and leaving the child alone with the stranger. Researchers classify the maternal-child attachment relationship based on the child's behaviour during reunion with the mother. Ainsworth suggests that attachment relations fall into three categories: securely attached, insecure-avoidant and insecure-ambivalent infants. Sometimes an additional category (disorganised) has been used. According to Ainsworth securely attached infants explore freely when their mother is present and use her as a secure base when a stranger appears. ...read more.

Crockenburg (1981) found that babies who were irritable after birth were less likely to attract responsive care from their mother and also less likely to develop a secure attachment with their mothers as assessed in the strange situation. The transactional model (Oates, 1994) takes into account this bi-directional reciprocal relationship between caregivers and their children, thereby supporting a more interactive model of attachment which better explains the active contribution of children, their caregivers and the day-care context in developing attachment styles of individuals. The foregoing discussion clearly shows that it's not possible generalise about the implications of day-care on attachment. There are many factors to be taken into account for example the circumstances surrounding a mother's decision to work full time, the nature and age of the child and the different forms of child care available. As has been discussed, it is very important to match or find a 'good fit' between the child's behaviour and the type of care he/she receives. Fortunately, the body of recent research and evidence supports this view and highlights the shift in developmental psychology away from the universal monotropic model of attachment towards a more flexible perspective which emphasises the importance individual differences and cultural context, namely that of the social cultural perspective. Nonetheless, the work of Bowlby and Ainsworth has been very important and cannot be disregarded. It has provided a base for future researchers to explore attachment and different forms of childcare which is and will continue to be a central issue in developmental psychology. ...read more.