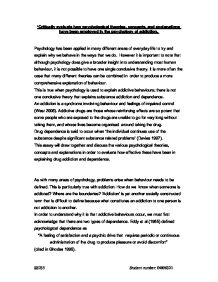 Critically evaluate how psychological theories, concepts, and explanations have been employed in the psychology of addiction.

'Critically evaluate how psychological theories, concepts, and explanations have been employed in the psychology of addiction. Psychology has been applied in many different areas of everyday life to try and explain why we behave in the ways that we do. However it is important to note that although psychology does give a broader insight into understanding most human behaviour, it is not possible to have one single conclusive theory. It is more often the case that many different theories can be combined in order to produce a more comprehensive explanation of behaviour. This is true when psychology is used to explain addictive behaviours; there is not one conclusive theory that explains substance addiction and dependence. An addiction is a syndrome involving behaviour and feelings of impaired control (West 2006). Addictive drugs are those whose reinforcing effects are so potent that some people who are exposed to the drugs are unable to go for very long without taking them, and whose lives become organised around taking the drug. Drug dependence is said to occur when 'the individual continues use of the substance despite significant substance related problems' (Davies 1997). This essay will draw together and discuss the various psychological theories, concepts and explanations in order to evaluate how effective these have been in explaining drug addiction and dependence. As with many areas of psychology, problems arise when behaviour needs to be defined. This is particularly true with addiction. ...read more.

One major problem with biological theories is that there is very little research in relation to drug addiction. Marshall (1990) found that some people may be disposed to drink more because of the comparative lack of effect alcohol has on them, compared to other people (cited in McMurran: 79), and we could generalise this to illicit drug taking. However this is by no means conclusive evidence supporting a biological theory, and the links are not as clear as those linking genetics to alcohol addiction (Diclemente 2003). Social learning theory suggests that we learn from observing other peoples experiences, which is known as modelling (Bandura 1977). For those who have learned that substance use helps them cope in short term situations, continued substance use will be likely (McMurran 1994). Addictions are often considered to be the result of poor or inadequate coping mechanisms. Individuals may turn to their addiction for escape or comfort, and to manage situations (Diclemente 2003). According to Social learning theory, the individual becomes 'more motivated to take the drug more often' in order to achieve the desired effects (West 2006). This theory focuses attention on social and individual decisions that are apparent when people become addicted to drug taking. It draws from basic 'rational choice theories' but adds a new dimension. Social learning theory suggests that people may choose to take a drug in the first place, whether this is modelling behaviour of their peers or as a 'coping mechanism' for difficult social situations, but the theory cannot explain why addiction may or may not develop as a result of drug use. ...read more.

None of the component factors alone is sufficient to cause drug dependence. There is a lack of longitudinal data investigating why children start to experiment with psychoactive substances, and why it is that some develop addictive behaviours and others do not. Obviously a lot more research on the topic of drug addiction is needed. Because of legal restrictions, alcohol has been the drug of choice when trying to explain addictive behaviour in humans, and illicit drug addiction has mainly been experimented on animals. Is it the physical dependence that is so hard to beat, or the psychological dependence, that is, the addiction to being an addict' (McMurran 1994). In other words, the person might be more addicted to the way of life than the drug itself, which is why there is not one single explanation of addiction, because of the varying types of dependence. Drugs may be chosen because they relieve feelings of anxiety, help control aggression, stress relief, help with insomnia, and so on (Buckley 1998 cited in West: 37; Turner et al 2006). If this is the case, it is easy to see why people become so easily 'addicted', because the thought of dealing with their problem without the drugs might be too difficult to imagine, so they continue in the cycle of taking drugs. One must then consider whether it is fair to label these people as addicts, as they are choosing to continue to take drugs, whereas the term addict is linked so closely with 'dependence', which implies behaviour beyond conscious control. ...read more.