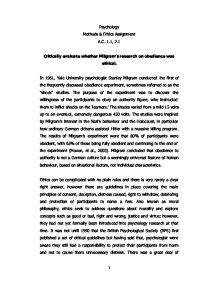 Critically evaluate whether Milgrams research on obedience was ethical

Psychology Methods & Ethics Assignment A.C. 1.1, 2.1 Critically evaluate whether Milgram's research on obedience was ethical. In 1961, Yale University psychologist Stanley Milgram conducted the first of the frequently discussed obedience experiment, sometimes referred to as the "shock" studies. The purpose of the experiment was to discover the willingness of the participants to obey an authority figure, who instructed them to inflict shocks on the 'learners.' The shocks varied from a mild 15 volts up to an eventual, extremely dangerous 450 volts. The studies were inspired by Milgram's interest in the Nazi's behaviour and the Holocaust, in particular how ordinary German citizens assisted Hitler with a massive killing program. The results of Milgram's experiment were that 80% of participants were obedient, with 65% of those being fully obedient and continuing to the end of the experiment (Moxon, et al., 2003). Milgram concluded that obedience to authority is not a German culture but a seemingly universal feature of human behaviour, based on situational factors, not individual characteristics. Ethics can be complicated with no plain rules and there is very rarely a clear right answer, however there are guidelines in place covering the main principles of consent, deception, distress caused, right to withdraw, debriefing and protection of participants to name a few. ...read more.

As in many areas of psychology, there will be situations where deception is more acceptable than others. If participants had been correctly informed of the true purpose of the experiment, it would have become more of a role-play scenario, which could lead to very different findings; therefore, the validity of the overall results would be compromised. There are different levels of deception that are more damaging than others and how uncomfortable or angry the participant appears when they are told about the deception are usually a good indication of how damaging it has been to them. The participants in Milgram's experiment did not seem to express anger, although some were very uncomfortable with their actions; however, most were simply relieved to learn they had not actually been administering the shocks. From the video footage and research material available, it would appear likely that many of the participants suffered psychological stress, which at times appeared to be of an unacceptable level. Several of them were visibly shaken by the "victims" pleas to stop and cries of pain and they repeatedly sought reassurance that they would not be held responsible for their actions. The participants showed signs of agitation and extreme discomfort at what they were being instructed to do, many of them trembling, stuttering and clearly sweating. ...read more.

[3 Jan 2010]. If Milgram's research were to be judged by today's standards with the current guidelines for psychological research, it would almost certainly be found to be unethical. The experiment breached several of the guidelines and although Milgram's arguments for this were relevant and possibly valid at that time, there would be a strong likelihood that there would now be major issues around the ethical implications. Serious concerns would be raised around the distress caused, justifiably so as, in fact one of the participants had a violent seizure and also the possibility of long-term damage. Having said that, psychology does allow for a balance between ethics and the benefit of the experiment on society. The argument for this though would have to be very strong, as whether an experiment can be deemed ethical tends to be of utmost importance in today's modern society. Milgram has argued that he was totally unaware of what the results would be, in fact he expected the participants not to obey the experimenter. Overall, the very way the experiment was carried out was unethical due to the major deceit involved and the potential for extreme long-term psychological damage to the participants. Even considering Milgram's arguments, a psychological study such as this would not be allowed in most countries today due to the ethical issues. Word Count: 1531 ?? ?? ?? ?? 1 ...read more.

Despite the point that modern ethical guidelines are more stringent, most of this essay has taken Milgram's side in defending his actions - so this conclusion doesn't really fit. This is a common problem in student essays - it is vitally important to consider everything that has been presented in the essay and to use the most convincing of these points in drawing the conclusion.
Overall, though, this is a well balanced and carefully structured essay, which would get a good mark at AS level if not A2.
4 stars.

This question on Social Psychology focuses on the ethical debate of Stanley Milgram's study of Obedience to an Authority Figure. The candidate shows an unbroken focus on the question and the entire answer is focused on the ethical regard in ...

This question on Social Psychology focuses on the ethical debate of Stanley Milgram's study of Obedience to an Authority Figure. The candidate shows an unbroken focus on the question and the entire answer is focused on the ethical regard in the experiment. A lengthy procedure that is often considered very unethical, this candidate has done well in structuring their answer by first explaining some background research to the experiment; briefly outlining the experiment itself; what ethics are; and why ethics are so important when evaluating Milgram's study. Al this shows the examiner the candidate possesses a deeply developed knowledge of the ethics of Psychology and how to apply them to psychological evidence for obedience and authority.

The Level of Analysis here is very good. There is a sound evaluation of the ethical issues of informed consent; possibility of deception; debriefing and follow-up procedures; and potential harm to the participant. Each ethical issue is backed up with evidence that is relevant to the study and there is a clear justification for the presence of such ethical issues, for example, ethical issues must be disregarded at time to ensure psychological studies like Milgram's don't become a role-playing exercise like Reicher & Haslam's failed BBC Prison Study). The answer also considers how temporal changes permitted Milgram's procedures in the 60s, but in modern day society, the ethical issues raised in Milgram's study wouldn't even get the all-clear from a ethics committee and therefore would achieve no funding. This kind of analysis is exactly what the question asking for - all the ethical issues are discussed in turn and then linked wherever possible, and it is this integration (such as the low validity if the participants gave informed consent) which makes reading the essay so interesting, because it is obvious the candidate has a good knowledge of psychology and it's ethical regards.

The Quality of Written Communication is good. There are only very few moments that feature a typing/spelling error, but none of these compromise the clarity of written expression. Overall the QWC is very high, as demonstrated by the extensive use of appropriate, field-specific lexis to approach the question (all of which are spelt accurately).