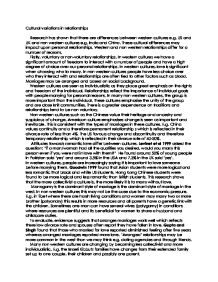 He found around 50% of young people in Pakistan said 'yes' and around 3.5% in the USA and 7.3% in the UK said 'yes'. In western cultures, people are increasingly saying it is important to love someone before marrying them. Goodwin 1999 found that Asian students were more logical and less romantic that black and white US students. Hong Kong Chinese students were found to be more logical and less romantic than British students. This research shows that the more collectivist a culture is, the more likely it is to marry without love. Monogamy is the dominant style of marriage is the dominant style of marriage in the west. In non western cultures this may not be the case due to the economic pressure. E.g. in Tibet where there are harsh living conditions and women may marry two or more brother (polyandry) this results in more resources and all parents have a genetic link with the children. ...read more.

Past divorce rates have been low e.g. 2 per 100 women in 1960 to 12 per 1000 in 1988. This however may be due to increased urbanisation. Our ideas about romantic love are the result of socialisation in a western culture where there are strong media influences e.g. songs and films. This is seen as "Hollywood Style love" and is absent from many non western cultures. Although monogamy is the norm in the west and polygamy in the non west, there are still examples of non monogamy in western culture e.g. extra marital affairs and bigamy. Cross cultural research is useful for making comparisons between cultures and gaining insight into relationships of different cultures. It is important to remember that many western cultures such as Britain have many sub cultures with non western backgrounds and will have relationships based on these factors. Cross cultural research is also useful for finding out human behaviours that may be universal. However we must be careful not to generalise research collected from small samples as this may not be representative. ...read more.