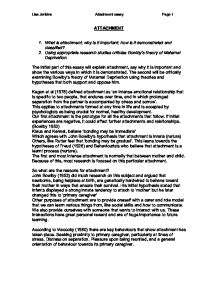 ATTACHMENT 1. What is attachment; why is it important; how is it demonstrated and classified? 2. Using appropriate research studies criticise Bowlby's theory of Maternal Deprivation. The initial part of this essay will explain attachment, say why it is important and show the various ways in which it is demonstrated. The second will be critically examining Bowlby's theory of Maternal Deprivation using theories and hypotheses that both support and oppose him. Kagan et al (1978) defined attachment as 'an intense emotional relationship that is specific to two people, that endures over time, and in which prolonged separation from the partner is accompanied by stress and sorrow'. This applies to attachments formed at any time in life and is accepted by psychologists as being crucial for normal, healthy development. Our first attachment is the prototype for all the attachments that follow. If initial experiences are negative, it could affect further attachments and relationships. (Bowlby 1953) Klaus and Kennel, believe 'bonding may be immediate' Which agrees with John Bowlby's hypothesis that attachment is innate (nature) Others, like Rutter feel that 'bonding may be gradual'. This leans towards the hypotheses of Freud (1926) and Behaviourists who believe that attachment is a learnt process (nurture). The first and most intense attachment is normally that between mother and child. ...read more.

Inconsistent mothers had resistant infants, and suffocating, or by contrast, uninterested mothers had infants that displayed anxious avoidant attachment. John Bowlby was born to an upper-middle class family in 1907. He was primarily raised by the family nanny. She left when he was four years old. He later described this as being as tragic as the loss of a mother In his adult life, Bowlbys research was mainly focused on the long term effects that early maternal separation could have on an infant. His Maternal Deprivation hypothesis stated that the attachment between an infant and its mother (or permanent mother figure) needs to be continuous; therefore can not be broken in the early stages of life without serious/permanent harm being done to the infants' emotional, social and intellectual development. This would seem to be supported by research carried out by Harlow (1962) on Rhesus monkeys. The newborn monkeys were separated from their mother and each other. When they were later reintroduced to their peers, they were antisocial, aggressive and near impossible to breed. The ones that were successfully artificially inseminated went on to reject their young, also confirming the importance of a prototype attachment in the early stages of development. Bowlby always maintained that there was a critical period in which a primary attachment needs to be made (in humans, before the age of 21/2) ...read more.

This has come under great amounts of criticism. Rutter believed that several attachments can be made other than to mother. Schaffer and Emerson also dispute Bowlbys monotropy theory and say that multiple attachments are not the exception, they are the rule. Bowlby did not disagree with this but felt the mother/infant bond was unique in that it was the first and the strongest. This would obviously make it the most important and influential. Most of Bowlbys' early research was carried out in the 1930's and 40's on children in large institutions and residential orphanages. Rutter (1981) felt this was giving a very limited view. It didn't consider other factors, for example the under stimulating nature of these environments, and in affect, other things could also be as contributory to the results observed as Maternal Deprivation. Although the Maternal Deprivation theory has become dated and undergone much criticism over the years, it can not be disputed that John Bowlbys' research has had huge impact on the way in which hospitals treat children during their stay. Parents are now actively encouraged to stay with their children, whereas before, they weren't, and newborns are no longer separated from their mother unless it would be detrimental to their health or wellbeing. Thanks to John Bowlby, it is now recognised that separation from a primary caregiver, does have long lasting, detrimental affects and should, if at all possible, be avoided. ...read more.