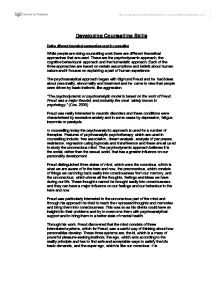 Developing Counselling Skills Define different theoretical perspectives used in counselling While people are doing counselling work there are different theoretical approaches that are used. These are the psychodynamic approach, the cognitive behavioural approach and the humanistic approach. Each of the three approaches are based on certain assumptions and beliefs about human nature and it focuses on explaining a part of human experience. The psychoanalytical approach began with Sigmund Freud and he had ideas about personality, abnormality and treatment and he came to view that people were driven by basic instincts, like aggression. "The psychodynamic or psychoanalytic model is based on the work of Freud. Freud was a major theorist, and probably the most widely known in psychology." (Cox, 2000) Freud was really interested in neurotic disorders and these conditions were characterised by excessive anxiety and in some cases by depression, fatigue, insomnia or paralysis. In counselling today the psychoanalytic approach is used for a number of therapies. Features of psychoanalytic psychotherapy which are used in counselling include; free association, dream analysis, analysis of par praxes, resistance, regression using hypnosis and transference and these are all used to study the unconscious mind. The psychodynamic approach believes it is the social, rather than the sexual world, that has a greater influence on our personality development. Freud distinguished three states of mind, which were the conscious, which is what we are aware of in the here and now, the preconscious, which consists of things we can bring back easily into consciousness from our memory, and the unconscious, which stores all the thoughts, feelings and ideas we have during our life. These thoughts cannot be brought easily into consciousness and they can have a major influence on our feelings and our behaviour in the here and now. Freud was particularly interested in the unconscious part of the mind and through his approach he tried to reach the repressed thoughts and memories and bring them into consciousness. ...read more.

The ego is developed during childhood from the id when a person learns that immediate gratification is not always possible because pain cannot always be avoided. The ego works on the reality factor and it decides on which actions are appropriate and which id impulses will be satisfied. The ego tries to balance out the demand of the id and the superego. The superego consists of a person's values and beliefs. Many of the ego decisions are conscious but some can be preconscious and others, like ego defences are unconscious. Within a care setting Freud's theory of psychoanalysis would be used to uncover unconscious conflict and help the clients to understand the causes of it so then they can come to terms with their problems. The types of counselling therapies that would be used to uncover unconscious conflict are; dream analysis, slips of the tongue, free association, regression, hypnosis and transference. Erik Erikson was a psychoanalyst as well as Sigmund Freud. Erikson concentrated on the ego which is known as the conscious part of the personality and how a person develops their adult identity. "Erikson proposed that the child has to work through various tasks, and what these tasks are depends partly on the child's maturation and partly on the demands of the society in which he or she lives. Like Freud, Erikson said the task, or problem, has to be successfully resolved at each stage, or there may be problems for the individual later on." (Woods, 1995) Erikson proposed that there are eight stages of developments through which a healthily developing human should pass from infancy to late adulthood. In each stage the person confronts, and hopefully masters, new challenges. Each stage builds on the successful completion of earlier stages. The challenges of stages not successfully completed may be expected to reappear as problems in the future. The eight stages of development are; infancy, younger years, early childhood, middle childhood, adolescence, early adulthood, middle adulthood and later adulthood Infancy is between birth and 12 Months which is the psychosocial crisis of trust versus mistrust. ...read more.

(Zippin-Knijnik, 2007) The disadvantage of this approach is that it does not always work due to the type of therapy it consists of because if a client is unwilling to talk about their past experiences that are causing them problems then they will be unable to work through them. The behavioural therapy is widely used when dealing with fears and additions. Classical conditioning can be used to stop addictions like smoking and drug taking within clients. The main advantage of this approach is that the treatment for it is available on the NHS so as everyone who is in desperate need for it can receive treatment. There is a disadvantage to Ellis and Beck's behavioural theory as well because the client is in need of a lot of supervision to constantly apply the stimulus so as they can have an immediate response to the situation. To do this a counsellor would need to be available at all times so as the client would have the same response to the stimulus. The humanistic approach is person-centred and an advantage of this is that most counselling organisation nowadays uses the person-centred approach to help their clients with their problems. A disadvantage of the humanistic approach is that it can be criticised for being culture bound. Also some people do not like the person-centred approach because they have to speak about themselves and some people may not feel comfortable talking about their feelings and they may prefer a structured approach. "Cultural difference can also influence they way clients perceive those who help them, and person-centred counsellors may sometimes be seen as passive or lacking in initiative by people who value advice or other more directive forms of intervention." (Hough, 2003) In conclusion one can see that there are positive and negative aspects to each of the three approaches. Each of these aspects depends on the type of person that the client is and the problem that they need support with and this is because there are not two individuals that are exactly the same within a counselling situation. ...read more.