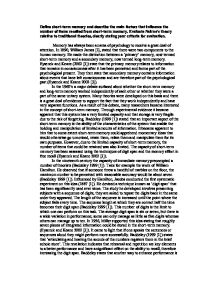 Define short-term memory and describe the main factors that influence the number of items recalled from short-term memory. Evaluate Nairne's theory relative to traditional theories, clearly stating your criteria for evaluation. Memory has always been an area of psychology to receive a great deal of attention. In 1890, William James [2], stated that there were two components to the human memory. He made the distinction between a 'primary' memory, now termed short-term memory and a secondary memory, now termed long-term memory. Eysenck and Keane (2002 [3]) state that the primary memory relates to information that remains in consciousness after it has been perceived and forms part of the psychological present. They then state that secondary memory contains information about events that have left consciousness and are therefore part of the psychological past (Eysenck and Keane 2002 [3]). In the 1960's a major debate surfaced about whether the short-term memory and long-term memory worked independently of each other or whether they were a part of the same unitary system. Many theories were developed on this basis and there is a great deal of evidence to support the fact that they work independently and have very separate functions. As a result of this debate, many researchers became interested in the concept of short-term memory. Through experimental evidence it became apparent that this system has a very limited capacity and that storage is very fragile due to the risk of forgetting. Baddeley (1999 [1]) stated that an important aspect of the short-term memory is the ability of the characteristics of the system that enable the holding and manipulation of limited amounts of information. It became apparent to him that to some extent short-term memory could apprehend momentary ideas that would otherwise go unnoticed, retain them, relate them and manipulate them for its own purposes. However, due to the limited capacity of short-term memory, the number of items that could be retained was also limited. ...read more.

The material words that took longer to pronounce were associated with a lower level of recall. Baddeley et al found a positive linear relationship existed between the number of items that could be recalled and the rate of rehearsal for particular material (Tehan and Lalor 2000 [6]). In 1992, Cowan [6] provided support for the work of Baddeley et al (1975 [6]); he found that there was a positive association between memory span and the duration of spoken recall. Cowan stated that more capable subjects responded at the same rate as subjects with lower memory spans but responses continued for longer periods. Cowan argues that pause times in-between the words reflects retrieval and reactivation efficiency. In other words, subjects are assumed to retrieve and refresh the unrecalled items from the short-term memory. With spoken recall studies such as those conducted by Cowan and Baddeley, items are subject to rapid decay during recall. Items in the short-term store are therefore at the risk of being forgotten before the recall task begins, mainly due to their fragile state in such a limited store. Various theorists such as Ebbinghaus (1885/1913 [3]) have argued that forgetting occurs because of a spontaneous decay in memory traces over time. Eysenck and Keane note that the main assumption is that forgetting depends on the length of the retention rather than on what happens between the learning and the test. In the late fifties, John Brown (1958) in the United Kingdom and the Petersons (1959) in the United States investigated short-term forgetting. Results of their studies showed that even sequences within the memory span would show clear forgetting if the subject was prevented from thinking about the stimuli or rehearsing it in anyway (Baddeley 1999 [1]). Peterson and Peterson (1959 [1,3]) conducted their experiment using sequences of three unrelated consonants. They presented the stimuli to their subjects and immediately after the subject had read them, they were shown a three-figure number and asked to start counting backwards from it in threes. ...read more.

Nairne believed the information stored in short-term memory is not an activated 'item' ready for retrieval, but an arrangement of activated cues that are reconstructed moments before retrieval. For Nairne, the cues in his feature model consist of previous records, for example, records of a just presented list that have deteriorated through interference would be present. He believes the process of retrieval consists of the item for recall being selected from the long-term memory. He states that it 'is not the match between the to-be interpreted cues and long-term memory candidates that is important but how well cues specify one or more of the targets (Nairne 2001 [5]). For Nairne, short-term forgetting in this model occurs because the available cues become poor predictors of target items. The models proposed by Nairne and Wickens are two examples of how remembering over the short-term is assumed to be primarily cue driven towards performance in come cases. It is evident that Nairne considers activation, rehearsal and decay to have an important role in remembering over the short-term. Throughout his article he also makes reference to the factors affecting recall such as digit span and the word length effect. As research progresses, new ideas are developed and researched. Long-term memory has always been specified as being cue-driven; it is therefore acceptable that the same idea could be applied to short-term memory. Nairne's theory is successful in developing the new idea of the involvement of cues in remembering. There is much research to show that theories and ideas regarding short-term memory are becoming more and more advanced. Baddeley has been a key researcher in the work on short-term memory and has helped to advance the discussion. Nairne's theory supports the standard model to some extent, he has accepted it and agrees with models that incorporate it's basic ideas. There is agreement about the fact that many factors have an effect on the amount of information one can recall from short-term memory, the only real dispute among researchers is remembering over the short term and whether or not models should be formed on a cue-driven basis. ...read more.

The writer has made a valid attempt at this essay including many references. There appears to be a clear understanding of the arguments surrounding the standard model and Nairne's cue driven model for the short term memory. However, this essay would have scored even higher if it had been written in the writer's own words. Also, some of the basic concepts should have been explained briefly, but concisely, instead of bypassing them altogether. Explaining these shows that the writer understands the work.