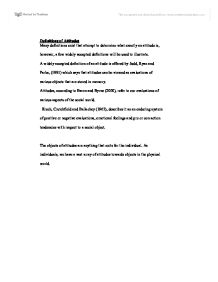 Definitions of Attitudes Many definitions exist that attempt to determine what exactly an attitude is, however, a few widely accepted definitions will be used to illustrate. A widely accepted definition of an attitude is offered by Judd, Ryan and Parke, (1991) which says that attitudes can be viewed as evaluations of various objects that are stored in memory. Attitudes, according to Baron and Byrne (2000), refer to our evaluations of various aspects of the social world. Krech, Crutchfield and Ballachey (1962), describes it as an enduring system of positive or negative evaluations, emotional feelings and pro or con action tendencies with respect to a social object. The objects of attitudes are anything that exits for the individual. As individuals, we have a vast array of attitudes towards objects in the physical world. There are three (3) primary approaches of analyzing attitudes. They are attitudes as memories, evaluations and dissection into three (3) major components call the ABC Triparte Model. Attitudes can be formed from memory. The more we master a task, the more we enjoy doing it and cultivate a positive attitude towards doing or learning something. For example, if an individual knows how to perform a task well, using a particular method, which has been repeated and memorized numerous times, they will be more likely to use the same method if asked to repeat the same task, as they are more familiar and comfortable with this method. ...read more.

An attitude is observed and influences and individual's own attitude towards the subject in question. In a parent-child relationship, children observer their parent's attitude and often times adopt them. If a child hears their parent making negative comments about an issue, they may possibly develop a negative attitude towards the same issue. Comparing our views to those of others, to see if our social reality is or is not correct, can form attitudes. We often change our attitudes to fit in with everyone else's so that we do not feel 'left out'. Political views are an example of this. An individual may hold a particular view on the current political administration, however, while in a group discussion, the general consensus may not be the same as that of the individual, who may then sway his/her attitude, towards that of the groups' in order to be a part of the discussion and use their views to second guess his/her views. Genetics play a small role in attitude formation. Studies conducted with identical twins suggest that attitudes may be influenced by genetic factors. Daniel Katz proposed a functional theory of attitudes. He thought that attitudes are determined by the functions they serve as they help the individual to achieve their goals. ...read more.

Forewarning is another form of persuasion where the individual has prior knowledge of the message holder's intent. While in a shopping mall, members of the Jehovah's Witness faith, called Pioneers like to stop people and preach their message. The message content may be important, but the individual knows that should they decide to stop and listen, they are in for a long-winded speech. Even if they are attention is caught, they may tune out the Pioneer, as the message is of little relevance to the individual. If we have pre-existing views on an issue, it may be difficult at times, for our views to change, and we usually resist any efforts to change our own views, by blocking out any instrument, which may be seeking to do so. This is called selective avoidance. Cognitive dissonance is a state that occurs when an individual's attitude and behaviour are inconsistent with each other. An individual may not agree with the opinion of his/her boss, but publicly supports the boss's view, perhaps because of the fear of not being considered for a promotion in the future. Dissonance, even though universal, may differ or vary culturally. To conclude, attitudes are very important to our everyday lives, because it depicts our emotions and feelings towards subjects and the way we handle these feelings and emotions to such subjects. ...read more.