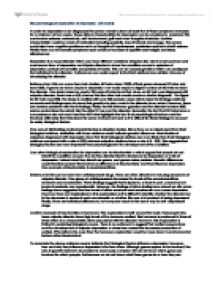 Discuss biological explanation of depression. (25 marks) In order for depression to be diagnosed the person needs to show at least five of these symptoms everyday for a minimum of two weeks. These clinical characteristics for depression can be emotional symptoms; this can involve sadness, melancholy, self-involvement, guilt and even thoughts of suicide. Another characteristic could be a lack of motivation including passivity, loss of interest and energy. The person could also have cognitive problems such as thoughts of hopelessness, pessimism and lack of self-esteem. Finally there can be somatic symptoms such as loss or increase of appetite and weight, and sleep disturbances. Depression is a mood disorder which can have different variations; Unipolar disorder is most common and most severe form of depression and bipolar disorder is where the condition occurs in episodes of depression, periods of normality and periods of mania. This can be caused genetics which can predispose the individual to the disorder. ...read more.

Ultimately the twins share the same environment and so it is difficult for these findings to account for solely biological factors. One way of eliminating environmental factors is adoption studies. Since they were raised apart from their biological relatives, similarities with those relatives would indicate genetic influences. Most studies of adoptees diagnosed with depression show that their biological relatives are more likely than their biological relatives compared with a rate of 20% whereas adoptive relatives have a rate of 5-10%. This suggests that biological factors are more important than psychological in the development of the condition. One other biological explanation for depression can be biochemistry which argues that people do not inherit the condition as such. Nor do they directly inherit a tendency for depression or a risk of depression. Instead what they inherit are genes, and genes make proteins. Genetic differences could therefore present themselves as differences in biochemistry and thus influence depression. ...read more.

However, this explanation is limited in explaning biological causes. There is no evidence to suggest that cortisol causes stress and the development of unipolar depression or stress has caused the increased production of cortisol. If the latter is the case then the hormone explanation could be more down to environmental factors rather biochemical. To conclude the above evidence seems indicate that biological factors influence depression. However, how and why they influence depression is far from clear. Although genes appear to be involved, the role of genetic factors in depression is enormously complex. We do not know which genes are involved fro which people. Furthermore we do not know what these genes do or how they are inherited. Similarly for biochemistry, we know very little about the way in which neurotransmitters like serotonin actually work. Ultimately we do not know that biochemical changes cause depression. Finally, the diathesis-stress model argues all psychological disorders are caused by diathesis (predisposition) and an environmental stressor. We may have the predisposition for depression. However, unless environmental stressors interact with the predisposition the condition will not be developed. ...read more.

The writer has covered some of the key points regarding biology and depression, and has brought all the information together at the end to write a reasonably good conclusion. The writer has a clear plan for the essay and so it follows a logical path.

In order to improve the score add a few more studies and make sure that they are all referenced properly.