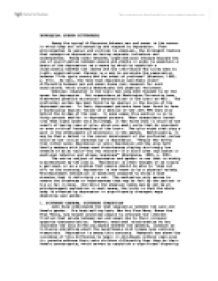 DEPRESSION: GENDER DIFFERENCES Among the myriad differences between men and women is the manner in which they are influenced by and respond to depression. From environmental to social and cultural to chemical, the divergent factors that categorize depression as having separate indicators and consequences. Among other methods, organizational therapy employs the use of clarification between people and events in order to ascertain a basis of the depression; as a means by which to establish a relationship between the issues and the individuals who bring them to light, organizational therapy is a way to correlate the association between "life cycle events and the onset of problems" (Stanton, 1992, p. 331). As well, the fact that depression manifests itself differently between men and women draws upon research for such conclusions, which clearly demonstrate the physical variances. Chemical imbalance in the brain has long been thought to be the cause for depression. But researchers at Washington University have discovered possible structural abnormalities in the brain as well. The prefrontal cortex has been found to be smaller in the brains of the depressed person. In fact, depressed patients have been found to have a drastically smaller volume of a section of the left PFC that sits behind the bridge of the nose. In some cases this section is up to forty percent smaller in depressed persons. When researchers looked into what might cause this shrinkage, it was found that it could be the result of having loss of glia, which are small cells that do important or even critical housekeeping of the brain. The glia might also play a part in the development of serontonin in the system. Additionally, it may be that a defect in the neural development of the prefrontal cortex could be the initial abnormality in depression. "People who suffer from either major depression or manic depression and who also have family members with these mood disturbances display strikingly low numbers of glial cells--but not neurons--in a brain area implicated in emotional behavior and stress responses" (Anonymous, 1998, p. ...read more.

Adolescence is an intense time and is normally a time of physical changes as well as psychological changes. Females in particular seem to experience stress that is not experienced by their male peers. Females commonly experience depression during adolescence and other characteristics such as obsessiveness, compulsion and general reticence are quite common. While most anorexics have co-occurring clinical depression there are others suffering from anxiety, substance abuse or personality problems as well as an increased risk of suicide. Parks et al (1997) notes that "within nonclinical samples, body image distortions have been associated with lowered self-esteem, depression, and chronic dieting" (p. 593). The vicious cycle that exists with depression and female eating disorders serves to perpetuate the mental imbalance. Indeed, the consequences are far greater than just being overweight. Obesity, in and of itself, leads to a number of other diseases and complications that can significantly shorten a person's life. Of the long list of ailments, those at the top include heart disease, some cancers, diabetes, high cholesterol and blood pressure, and gallbladder disease. However, the mental distress such behavior causes is a significant concern, for a poor emotional outlook also takes its toll on the body. A common denominator among women with eating disorders is the overwhelming feeling of inadequacy they experience. Attempts to control their problem usually prove futile, which serves to plummet them even further and further into the depths of shame and depression. Based upon an article from the British Medical Journal entitled "Male Sexual Problems," the findings indicate that male sexual function is so completely interwoven with other factors that there is no one single factor that can be considered the cause of sexual dysfunction. Dysfunction is often the result of factors such as complications from illness, general poor health or even side effects from treatment of other illnesses. Impotence is the major common side effect of many drugs, and it has also been a known side effect of aging, anxiety and depression. ...read more.

As Wertz (1998) notes: "Unlike physical things, mental life contains no independent elements but different moments mutually implicating each other in the whole" (p. 42). V. CONCLUSION While depression may be an equal opportunity disease, the manner by which it is initially cultivated and ultimately manifested is quite different between the genders. Scientific research has suggested that a combination of social, cultural and environmental factors is collectively at work to individualize the often covert and sometimes covert gender responses that trigger depression. Hoyle (1991) notes that these relationships, which have to do with items that "indirectly measure a psychological construct and relations among psychological constructs" (p. 67), are the focus determining variables. The manner by which depression overtakes each gender is a varied as how the illness is ultimately manifested. While men may internalize their disease, women typically express it through emotional demonstration. There is no concrete equation as to why men react differently than women to the same stimuli, whether that particular motivational factor happens to stem from external forces or internal distress. Indeed, research has more than effectively documented the obvious and contrasting ways in which men and women exist in order to build a foundational basis of fact. Clearly indicative of how environmental, social and cultural components reflect a gender difference in depression is how men and women have come to deal with various situations that arise. Indeed, research has shown that while genetic consideration is strong with regard to depression, other outside influences have been known to contribute, as well. That men are taught to be strong and fearless adds to their inability to process their emotions, ultimately causing a backup of emotional distress that leads to depression. Women, on the other hand, while able to express themselves, often find that they are up against an emotional brick wall nonetheless. Characteristically speaking, depression may affect men and women in the same general way; however, the manner by which it is first cultivated and then manifested is quite different between genders. ...read more.