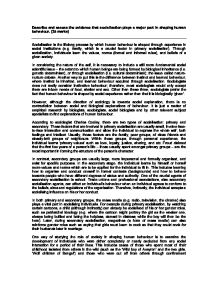 Describe and assess the evidence that socialisation plays a major part in shaping human behaviour. [25 marks] Socialisation is the lifelong process by which human behaviour is shaped through experience in social institutions (e.g. family, which is a crucial factor in primary socialisation). Through socialization, individuals learn the values, norms (formal and informal rules), and beliefs of a given society. In considering the nature of the self, it is necessary to include a still more fundamental social scientific issue - the extent to which human beings are being formed by biological inheritance (i.e. genetic determinism), or through socialisation (i.e. cultural determinism); the issue called nature-nurture debate. Another way to put this is the difference between instinct and learned behaviour, where instinct is inherited, and learned behaviour acquired through socialisation. Sociologists does not really consider instinctive behaviour; therefore, most sociologists would only accept there are inborn needs of food, shelter and sex. Other than these three, sociologists prefer the fact that human behaviour is shaped by social experience rather than that it is biologically 'given'. ...read more.

Therefore, indirectly, the individual accepts a socialising influence on his or her conduct. In both primary and secondary groups, the mass media (e.g. radio, television, the cinema) also plays a vital part in socialising individuals. For example during primary socialisation, by watching certain cartoons, a child (although indirectly) can already be socialised of his or her gender roles, such as patriarchal ideology (e.g. where the cartoon might portray the girl as the weaker one, always being bullied and being the helpless, damsel in distress; while the boy will then be the hero). Later, during secondary socialisation, magazines (a form of mass media) can also reinforce gender roles such as saying that girls must learn to cook so that they could cook for their husbands later in marriage. One way of studying the role of society in shaping human behaviour is to examine the development of individuals who were either completely or nearly excluded from any social interaction for a period of their lives. ...read more.

Her improvement showed that socialisation, even when started late at the age of six, could still do a great deal toward making her a person. The effects of growing up in unsocial conditions in these and other analogous cases seem consistent. When the children emerged immediately in the society, the children were typically described by observers as 'primitive' and 'hardly human'. None of the children developed social and communication skills beyond a basic level, in spite of attempts and efforts to resocialise them. Above all, their absence or limited ability to learn language prevented them from functioning fully in the adult society. These cases, also, collectively suggest that human development, especially of gaining basic social and communication skills, needs considerable contact with others. Only in social background that human self can develop. Therefore, self and society balances each other and are complementary concepts rather than conflicts with each other as they sometimes appear to be. Without socialisation, an individual would bear little resemblance to any human being defined as normal by the standards of his or her society. You can't have individuals without society or society without individuals. ...read more.

The writer has addressed the essay title and has covered most of the major points. However, the writing style is confusing at times with simple grammatical errors. The writer is advised to try a more simple style of writing that shows a clear understanding of the subject matter. Also, all authors and research studies need to be referenced correctly.