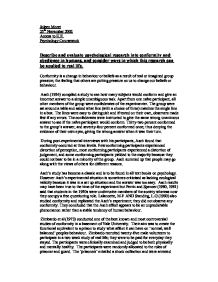 Describe and evaluate psychological research into conformity and obedience in humans, and consider ways in which this research can be applied to real life.

Joleen Moret 25th November 2002 Access to H.E. Psychology Coursework Describe and evaluate psychological research into conformity and obedience in humans, and consider ways in which this research can be applied to real life. Conformity is a change in behaviour or beliefs as a result of real or imagined group pressure; the feeling that others are putting pressure on us to change our beliefs or behaviour. Asch (1956) compiled a study to see how many subjects would conform and give an incorrect answer to a simple unambiguous task. Apart from one na�ve participant, all other members of the group were confederates of the experimenter. The group were sat around a table and asked what line (with a choice of three) matches the single line in a box. The lines were easy to distinguish and if tested on their own, observers made few if any errors. The confederates were instructed to give the same wrong unanimous answer to see if the na�ve participant would conform. Thirty-two percent conformed to the group's answer, and seventy-four percent conformed once; thus denying the evidence of their own eyes, giving the wrong answer when it was their turn. ...read more.

Zimbardo believed that "the reality of this study and its findings made people uneasy because they preferred not to consider that they might have behaved in the same". The result of the simulation may have shown to what level the students conformed to under a great deal of stress; they could have conformed for many reasons for example: so as not to be a failure, it was in a prestigious university and maybe because they were being paid. The result is bias because they were all male participants, of one culture and all students. The results can not be generalised any further than of this type of person and the type of environment they were in; which was nothing like what they had been used to. Asch's research has highlighted that in some situations people are not sure of what they believe is right. The results of the Asch effect could be a way of interviewing new employees and detecting the most self assured, confident people, whom use their own initiative, can work under pressure and does not conform to group pressure. Zimbardo's research could be used in total institutions such as prisons, the forces and psychiatric units. ...read more.

suggested that Milgrams results were valid. Hofling showed that obedience to an authority figure could occur just as readily in real life. In Hoflings experiment, nurses in a hospital were asked over the phone by a bogus doctor to administer an overdose of a drug without obtaining authorisation. Twenty-one out of twenty-two nurses attempted to administer the placebo drug, but before it was given the nurse was told of the true nature. This order violated several rules; the dose was clearly excessive, medication orders are not permitted to be given by telephone, the medication was an 'unauthorized' drug, and the order was given by an unfamiliar person. Despite all this ninety-five percent of the nurses started to give the medication. In interviews after the experiment, all the nurses stated that such orders had been received in the past and that doctors became annoyed if they did not do so. The results of this experiment could be said to be biased; the subjects were all nurses and are influenced by a social role, the results could only be true of the time and could not be representative to today's nurses. Milgrams and Hoflings studies show us how powerful obedience is, and what effects the level of obedience. The results form these studies could be applied in schools, the police, the forces or of any presence of authority. ...read more.

An interesting selection of research utilised to debate the question of conformity and obedience and how this can be applied to real life. 4*