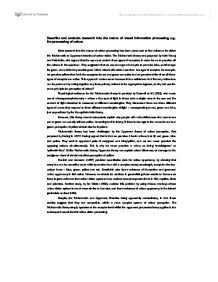 Describe and evaluate research into the nature of visual information processing

Describe and evaluate research into the nature of visual information processing e.g. the processing of colour. Most research into the nature of colour processing has been conducted to find evidence for either the Trichromatic or Opponent theories of colour vision. The Trichromatic theory was proposed by both Young and Helmholtz, who argued that the eye must contain three types of receptors, in order for us to perceive all the colours in the spectrum. They suggested that we use one type of receptor to perceive blue, another type for green, and a third for perceiving red. Other colours stimulate more than one type of receptor, for example, we perceive yellow when both the receptors for red and green are active and we perceive white when all three types of receptor are active. ...read more.

They discovered there are three different types of cones that respond to three different wavelengths of light - corresponding to red, green and blue, just as predicted by the Young-Helmholtz theory. However, this theory cannot adequately explain why people with colour-blindness who cannot see red or green can usually still see yellow. According to this theory, if there is damage to the cones for red and green, perception of yellow should also be impaired. Trichromatic theory has been challenged by the Opponent theory of colour perception, first proposed by Hering in 1872. Hering argued that in fact we perceive 4 basic colours (not 3): red, green, blue and yellow. They work in opponent pairs of red/green and blue/yellow, and we can never perceive the opposing colours simultaneously. ...read more.

Svaetichin also found evidence of blue-yellow and green-red colour opponency in fish retina. However, we should be cautious in generalising these results to humans as there is good evidence that colour vision systems have evolved several separate times in fish, reptiles, birds and primates. Another study, by De Valois (1960), avoided this problem by using rhesus monkeys whose colour vision system is much more similar to humans, and found evidence of colour opponency in the lateral geniculate nucleus (LGN). Despite the Trichromatic and Opponent Theories being apparently contradictory, in fact these studies suggest that they are compatible, within a more complex system of colour perception. The Trichromatic theory simply operates at the receptor level whilst the opponent processes theory applies to the subsequent neural level of colour vision processing. ...read more.