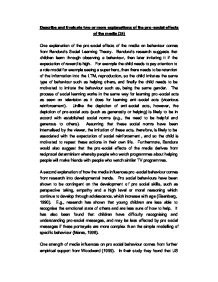 Describe and Evaluate two or more explanations of the pro-social effects of the media (24) One explanation of the pro-social effects of the media on behaviour comes from Bandura's Social Learning Theory. Bandura's research suggests that children learn through observing a behaviour, then later imitating it if the expectation of reward is high. For example the child needs to pay attention to a role model for example seeing a super hero, then there needs to be retention of the information into the LTM, reproduction, so the child imitates the same type of behaviour such as helping others, and finally the child needs to be motivated to imitate the behaviour such as, being the same gender. The process of social learning works in the same way for learning pro-social acts as seen on television as it does for learning anti-social acts (vicarious reinforcement). Unlike the depiction of anti-social acts, however, the depiction of pro-social acts (such as generosity or helping) is likely to be in accord with established social norms (e.g., the need to be helpful and generous to others). ...read more.

One strength of media influences on pro social behaviour comes from further empirical support from Woodward (1999). In their study they found that US programmes for pre-school children had high levels of pro-social content: 77% of programmes surveyed contained at least one pro social lesson. This suggests that there is wider academic credibility for the influence media has on pro-social behaviour. A further strength of LST comes from further empirical support provided by Mares and Woodward (2001). They found from their research that children are most affected when they are able to see exact steps for positive behaviour, such as when someone donates tokens. This could be because they can remember concrete acts better than abstract ones. This suggests that there is wider academic credibility for the idea of imitating pro-social behaviour. Furthermore, the explanations into the media effects on pro-social behaviour is that there are practical applications. For example, Johnston et al. Found that learning pro social behaviour was best when there were follow up discussions. ...read more.

This suggests that the findings from this research could not be applied to real life situations. Another weakness of Johnston's research is that there is contradictory evidence provided by Rubenstein et al. (1982). They found that in a study of adolescents hospitalised for psychiatric problems, found that post-viewing discussion led to decreased altruism, possibly because the adolescents wanted to take up a view that was contrary to that held by adults. Moreover, the effects of media on pro-social behaviour is that it is reductionist. The reason for this is because other factors need to be involved, for example personality and temperament of the child and parents. This suggests that the research is oversimplistic when explaining helping behaviour. A final weakness is that the research is culturally specific. The reason for this because the majority of the research has been carried out in the USA and therefore the criteria of pro-social behaviour may be different to non-western societies. This suggests that the research cannot be generalised to the whole population. ?? ?? ?? ?? ...read more.

This essay makes a good attempt at answering the question with a balanced presentation of evidence for pro-social influence of the media. Remember to proofread