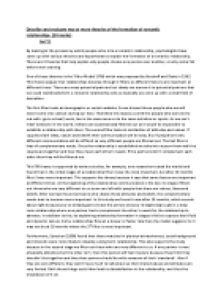 Describe and evaluate two or more theories of the formation of romantic relationships. (24 marks)

﻿Describe and evaluate two or more theories of the formation of romantic relationships. (24 marks) Jan?11 By looking at the process by which people enter into a romantic relationship, psychologists have come up with various theories and hypotheses to explain the formation of a romantic relationship. There are 2 theories that help explain why people choose one person over another, or why some fail before even starting. One of these theories is the ?Filter Model? (FM) which was proposed by Kerchoff and Davis in 1962. This theory argues that relationships develop through 3 filters so different factors are important at different times. There are many potential partners but slowly we narrow it to potential partners that we could realistically form a romantic relationship will; so basically we come up with a small field of desirables. The first filter looks at demographic or social variables. So we discard those people who we will never come into contact during our lives. Therefore this leaves us with the people who we tend to mix with: go to school/ work, live in the same area or do the same activities or sports. As we can?t meet everyone in the world, millions are automatically filtered out as it would be impossible to establish a relationship with them. ...read more.

There is another element of bias as questionnaires were used. As it was an opportunity sample the students may have responded in a way that they thought would benefit the researcher and in a way that was regarded by social norms. Therefore all these factors show that there was social desirability bias, demand characteristics and population validity. The second theory is the reward/need satisfaction (RNS) theory, which states that we form friendships and relationships to receive rewards or reinforcement from others. In order for a relationship to progress, both partners must be motivated to continue getting to know each other. The theory also stated that a relationship is more likely to be formed if a person meets the needs of the partner and they provide rewards. Relationships provide rewards such as sex, love, money etc which satisfy our social needs, e.g. self-esteem, dependency etc. So in terms of operant conditioning, the relationship is being positively reinforced because it?s rewarding. Both needs and rewards need to be fulfilled for a relationship to work. This theory agrees with the FM as both stresses the importance of satisfying each other?s needs. However, they have different views on when they should be met. For example, the FM states it should be during filter 3, once they have already met those who are similar to them in terms of attitudes and values, and where they have filtered out those who are very different. ...read more.

This may represent a narrow view of factors important in forming a relationship, with other factors for example economic level or physical condition. However, both the FM and RNS have ignored individual differences. In the FM there are some couples who have nothing in common but their relationship is as strong as others who have everything in common. Sometimes it?s better to have fewer things in common than everything because couples can get bored of each other when everything they do is the same. In the RNS model there are some individuals who don?t like being rewarded but like satisfying their partner?s needs, so there is no need to have a balance in needs and rewards as they will be happy in their relationship. This leads us to the last point of cultural bias. Both these theories are culturally specific as it has been researched in a particular culture and country. The psychologists haven?t taken into account cultural relativism as they have only studied one culture and disregarded the idea that all cultures are different but they are equally worth studying. There is an element of ethnocentrism as the findings from the research has been generalised to all other cultures. In the RNS model this is greatly criticised as many cultures focus on the needs rather than receiving rewards, so in these relationships there won?t be a balance. ...read more.