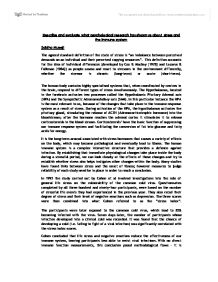 Describe and evaluate what psychological research has shown us about stress and the immune system Sabiha Museji The agreed standard definition of the state of stress is "an imbalance between perceived demands on an individual and their perceived copying resources". This definition accounts for the idea of individual differences (developed by Cox & Mackay [1978] and Lazarus & Folkman [1984]) as people assess and react to stressors in the environment differently, whether the stressor is chronic (long-term) or acute (short-term). The human body contains highly specialised systems that, when coordinated by centres in the brain, respond to different types of stress simultaneously. The Hypothalamus, located in the forebrain activates two processes called the Hypothalamic Pituitary Adrenal axis (HPA) and the Sympathetic Adrenomedullary axis (SAM). In this particular instance the HPA is the most relevant to us, because of the changes that take place in the immune response system as a result of stress. During activation of the HPA, the hypothalamus activates the pituitary gland, stimulating the release of ACTH (Adrenocorticotrophic hormone) into the bloodstream; after the hormone reaches the adrenal cortex it stimulates it to release corticosteroids in the blood stream. ...read more.

of the study are reliable. It could be argued however that this reduction is too small to increase the chances of stress related illnesses and therefore insignificant. Furthermore, the narrow size of the cohort (medical students) means the study lacks ecological validity and it is therefore difficult to generalize. Perhaps for this reason, it led the K-G researches group to delve into further studies several years later. Despite these obstacles, in 1995, K-G were able to conduct studies that revealed small wounds take longer to heal in highly stressed groups such as carers for Alzheimer patients, due to reduced immune function caused by stress. Although the initial study had been limited to measuring blood samples of medical students alone, the fact that further studies were carried out using new groups, (carers for Alzheimer's and women involved in divorce proceedings, K-G et al 1987, 1991) and immune function was found to be reduced in these highly-stressed groups too suggests that a link between stress and health outcomes exists. Despite the participant group changing, the procedure used was the same- measurements of Natural Killer cells, excluding the rest of the complex immune system and the effects that stress may have on it. ...read more.

Nonetheless, immune changes due to stress are not simplistic; there are shifts from natural to specific immunity and sometimes imbalances between cellular and humoral immunity. There was no real evidence of gender differences but in another study conducted by Kiecolt-Glaser et al (1998), it was shown that there was greater reduced immune function in women encountering martial conflict. These studies, however, did pose many limiting factors, which resulted in indefinite answers. This was due to the studies being correlation studies, so no specific cause and effect could be established. There were also limitations in the participants, which were very specific, hindering us from generalising and applying results to a whole population (hence the importance of meta-reviews in collecting specific data in order to gain an overall idea). Ethical issues in these studies are problematic as Kiecolt-Glasers group inflicted wounds from blood samples to her participants (leading to distraction over the important exam period) and Cohen et al's study did not protect participants from the risk of catching a cold. Participants however, were made aware of potential consequences and they all gave their consent, so there was no real evidence of deception involved. Nevertheless, who would be held liable should anything go wrong, in these circumstances? ...read more.