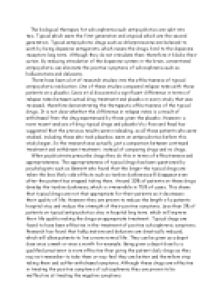 ﻿The biological therapies for schizophrenia such antipsychotics are split into two. Typical which were the first generation and atypical which are the second generation. Typical antipsychotic drugs such as chlorpromazine are believed to work by being dopamine antagonists, which means the drugs, bind to the dopamine receptors long term. Although they do not stimulate them therefore it blocks their action. By reducing stimulation of the dopamine system in the brain, conventional antipsychotic can eliminate the positive symptoms of schizophrenia such as hallucinations and delusions. There have been a lot of research studies into the effectiveness of typical antipsychotic medication. One of these studies compared relapse rates with those patients on a placebo. Davis et al discovered a significant difference in terms of relapse rates between actual drug treatment and placebo in every study that was reviewed, therefore demonstrating the therapeutic effectiveness of the typical drugs. ...read more.

Around 30% of patients on these drugs develop the tardive dyskinesia, which is irreversible in 75% of cases. This shows that typical drugs are not that appropriate for their patients as it decreases their quality of life. However they are proven to reduce the length of a patients hospital stay and reduce the strength of their positive symptoms. Less than 3% of patients on typical antipsychotics stay in hospital long term, which will improve their life quality making the drugs an appropriate treatment. Typical drugs are found to have been effective in the treatment of positive schizophrenic symptoms. Research has found that hallucinations and delusions are drastically reduced, which will allow patients to live a more normal life. They can be given as a depot dose once a week or once a month for example. ...read more.

There were rates of just 5% which were found amongst people who were treated with atypical drugs for 9 or more months compared with 30% on typical drugs. Which shows in terms of improving patients quality of life is a plus as they have a lower chance of developing a severe neurological illness. However atypical drugs have been linked to Agranulocytosis in 1-2% of the patients using it, although the number seems small , it?s a serious side effect which weakens the immune system to a point where patients pick up infections easily some of which may even be deadly. Research into the effectiveness of atypical drugs has found that they reduce negative symptoms as well as positive, this makes it a more effective treatment for the symptoms of schizophrenia than typical drugs. Fewer side effects have been noticed which results in patients continuing with their treatment and they therefore gain the additional health benefits of having there schizophrenia better managed. ...read more.