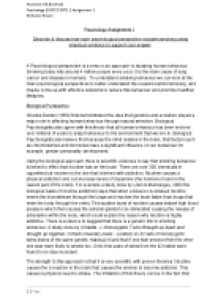 ﻿Access to HE (Science) Psychology (SCIFT/SCIPT) 1 Assignment 1 Nichola J Brown Psychology Assignment 1 Describe & discuss how each psychological perspective explains smoking using empirical evidence to support your answer A Psychological perspective is a view or an approach to studying human behaviour. Smoking today kills around 4 million people every year; it is the main cause of lung cancer and disease in humans. To understand smoking behaviour we can look at the main psychological perspectives to better understand the reasons behind smoking, and maybe come up with effective solutions to reduce this behaviour and promote healthier lifestyles. Biological Perspective Charles Darwin (1859) first demonstrated the idea that genetics and evolution played a major role in affecting human behaviour through natural selection. Biological Psychologists also agree with this theory that all human behaviour has been evolved over millions of years to adapt behaviour to the environment that we live in. Biological Psychologists also believe that because the mind resides in the brain, that factors such as chromosomes and hormones have a significant influence on our behaviour for example, gender personality development. Using the biological approach there is scientific evidence to say that smoking behaviour is linked to effect that nicotine has on the brain. There are over 300 chemicals in cigarettes but nicotine is the one that is linked with addiction. Nicotine causes a physical addiction and can increase levels of dopamine (the hormone found in the reward part of the brain). ...read more.

In Banduras Bubo doll experiment he demonstrated that children learn to imitate behaviours they have witnessed in other people. This theory can be explained in smoking behaviour and why children smoke. Social learning theory states that we copy or model our behaviour from role models for example from parents, media or peer groups. So when a child observes a role model smoking and enjoying the habit, they try to imitate it. At first they might find this disgusting or revolting but continue with this habit because they expect to enjoy as much as their role model does. Parent?s attitude to smoking can be a strong factor in why children take up smoking. (Lader D, Matheson J. Smoking among secondary school children in 1990. London: HMSO; 1991.).found that when the parents smoked, their children were twice as likely to take up the habit as those whose parents did not. The learning theory approach is very experimental in its approach, therefore ignoring the mental processes involved in learning, proposed by the cognitive psychologists. It ignores the built in bias in learning due to evolution. It also ignores free will as a reason to smoke. Cognitive approach Cognitive psychologists believe that the study of the internal mental process is an important way to understanding human behaviour. Cognitive processes actively organise and manipulate the information we receive-humans do not just passively respond to their environment. ...read more.

Psychology should investigate the internal experience as well as external behaviour and consider that individuals show a certain amount of free will. Two of the most influential and enduring theories in humanist psychology emerged in the 1950s and 1960s those of Carl Rogers and Abraham Maslow. To explain smoking behaviour using the humanist approach we can refer to Maslow?s Hierarchy of needs (1908 -1970), his theory like Freud?s centre?s on the different stages of human development. Maslow hierarchy of needs used terms such as physiological, safety, love and belonging, esteem and self-actualisation to explain human developmental psychology. The esteem stage of the hierarchy focuses on a human need to have self-esteem or feel respected. Low self- esteem presents a human desire to be accepted, so by engaging in certain behaviour like smoking, a person might feel more accepted by their peers. There could be an element of free will when choosing to engage in smoking or not. There is merit in this approach in that each human being is unique in the way they think and feel but fails to acknowledge the scientific reasons for a person to smoke for example addiction to nicotine. There is a lack of empirical evidence to support its ideas. To summarise there are scientific and non-scientific reasons to explain smoking behaviour, and the main psychological perspectives can give explanatory powers towards the reasons that we smoke. Maybe with differing opinions we can gain some insight into how we can understand our behaviour in the future. ...read more.