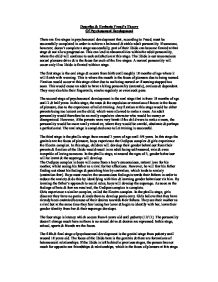 Describe & Evaluate Freud's Theory Of Psychosexual Development There are five stages in psychosexual development that, according to Freud, must be successfully completed in order to achieve a balanced & stable adult personality. If someone, however, doesn't complete a stage successfully, part of their libido can become fixated at that stage & not allow progression. This can lead to abnormalities within the adult personality, where the child will continue to seek satisfaction at this stage. The libido is our unconscious sexual pleasure drive & is the focus for each of the five stages. A normal personality will occur only if no libido is fixated within a stage. The first stage is the oral stage & occurs from birth until roughly 18 months of age where it will finish with weaning. This is where the mouth is the focus of pleasure due to being nursed. Fixation would occur at this stage either due to not being nursed or if nursing stopped too soon. This would cause an adult to have a biting personality (sarcastic), envious & dependent. They may also bite their fingernails, smoke regularly or even suck pens. The second stage of psychosexual development is the anal stage that is from 18 months of age until 2 & half years. ...read more.

They see their mother as a rival but at the same time they fear losing her lover & begin to identify with her, learn their gender identity from her & their superego develops. The four stage is latency which occurs from 6 years old until puberty (12/13). The personality doesn't change much here as there is no sexual drive & desires are repressed. In this stage, school, sports & friends are the focus. The fifth & final stage of psychosexual development is the genital stage from puberty until around 18 years old. The focus of the libido here is the genitals & there are formations of heterosexual relationships. If the libido is left behind in previous stages, the person has not much for opposite sex friendships & relationships, which is the focus of pleasure at this stage. Freud explained that as well as the five stages, we also have three other aspects to our personalities. The first part is the ID; this is in-built & develops from birth. It is the demanding part to the personality, acts on the pleasure principle & is biological as it is instinctive. The Ego is the second part of the personality to develop. It is the reality principle which seeks to maintain the demands of both the ID and Superego. ...read more.

This is often how people respond to bad news. We can deny impulses through this method because they are likely to be socially unacceptable e.g. sexual urges. Freud's theories have had contributions to society as it has drawn attention to the possible long-term effects of traumatic events in childhood e.g. child abuse & parental separation. A specific gender evaluation would be that in the case of Little Hans; he had a phobia of horses because he was having trouble in resolving conflict in the Oedipus complex. However, Freud's ideas are unscientific & difficult to study for example the id, superego unconscious ect. They are very abstract & are not measured & so cannot be proved. His theories also require subjective interpretation from the therapist e.g. free association meaning that the data may be biased & cause the theory to lack reliability. Another weakness is that Freud used biased research samples as his patients were mostly middle class women, meaning that his research lacks generalisbility to the general population. Furthermore, his theories are gender biased by saying that women suffer from penis envy & thus showing women to be inferior to men. There is also opposing research against the Oedipus complex; studies of single & gay parent families, where there is an absence of the Oedipus complex, show there was no impact on later personality development. ...read more.

This essay is a very extensive survey of Freud's theory of psychosexual development, which includes the Tripartite theory, the five stages of development, the levels of consciousness in the mind, and the Oedipus and Electra complexes. The description of Freud's ...

This essay is a very extensive survey of Freud's theory of psychosexual development, which includes the Tripartite theory, the five stages of development, the levels of consciousness in the mind, and the Oedipus and Electra complexes. The description of Freud's theory of psychosexual development is excellent and very detailed, and the candidate must be praised for this. They introduce each part of Freud's theory and explain the ways in which Freud believed it to affect personality development. However, their evaluation of the theory is a little lacking, consisting mostly of a few paragraphs at the end of the essay. It would be better if the two parts of the essay were more balanced, as marks will be awarded for demonstrating both description and evaluation skills, and therefore it is best to try to make the essay as balanced as possible, as it gives candidates the best chance of being awarded a higher grade. However, it is understandable that time constraints may mean that the second part of the essay was rushed, or the candidate failed to finish in time.

The candidate's level of analysis is acceptable, but it lets the essay down a little. The candidate provides accurate and appropriate evaluation of Freud's theory of psychosexual development, however it would be better if they were to include more, as previously stated. The fact that the candidate includes both strengths and weaknesses of Freud's theory is good, and the inclusion of the example of Little Hans, one of Freud's patients, demonstrates both a good knowledge of Freud's work and initiative to include the example, suggesting this is a strong candidate. An approach which may help the candidate is to highlight or underline the key words in the question, such as "describe" and "evaluate", as this reminds them of the importance of both parts of the question, and may have prompted them to include more analysis. Candidates could also consider including short comments evaluating the points they are making as they are going along, as this may be a way to include lots of analysis fairly easily.

There are some minor spelling and grammatical errors, such as missed apostrophes, spelling errors ("the four stage", not the fourth stage). The candidate could improve the flow of their essay by using a greater variety of long and short sentences; at present the essay feels a little stilted due to the frequent and concurrent use of short, simple sentences. While these criticisms may seem more appropriate for an English essay, having a mature writing style and good spelling and grammar helps to give a good impression to examiners, and it may make them mark a candidate's essay more favourably, particularly if it is on the borderline of grades. Overall, the candidate's quality of writing is fair, but it could be improved without too much work from the candidate.