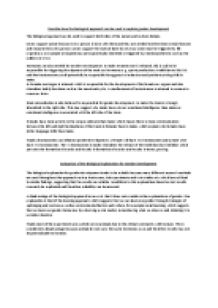 ﻿Describe how the biological approach can be used to explain gender development The Biological Approach can be used to support both sides of the nature and nurture debate. Genes support nature because every person is born with them and they are needed to determine certain features and characteristics of a person. Genes support the Nurture date however as some must be triggered by life experience, or example schizophrenia can be genetically inherited or triggered by emotional distress such as the soldiers in WW2. Hormones are also needed for Gender Development. In males testosterone is released, this is said to be responsible for triggering development of the male sex hormones e.g. ...read more.

Brain Lateralisation is also believed to responsible for gender development. In males the brain is strongly lateralised to the right side. This may suggest why males have a lower emotional intelligence than males as emotional intelligence is associated with the left side of the brain. Females have more activity in the corpus callosum that males which means there is more communication between the left and right hemispheres of the brain in females than in males, which explain why females have better language skills than males. Finally chromosomes can influence gender development. A female will have XX chromosomes and a male with have XY chromosomes. ...read more.

In addition to this explanations based on test results can easily be replicated and therefore reliability can be assessed. A disadvantage of the biological approach however is that it does not consider other explanations of gender. One explanation is that of the learning approach which suggests that we can learn our gender through strategies of upbringing and nurture as well as environmental factors and culture, for example social learning, which suggests that we learn our gender behaviour by observing a role model, remembering what we observe and imitating it in a similar situation. Finally most of the experiments are carried out on animals due to the ethical constraints with humans. This is considered a disadvantage because animals do not carry the same hormones as us and therefore results may not be generalizable to humans. ...read more.