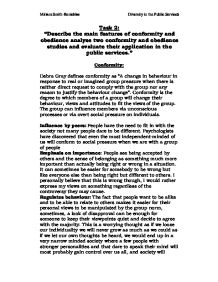 Task 2: "Describe the main features of conformity and obedience analyse two conformity and obedience studies and evaluate their application in the public services." Conformity: Debra Gray defines conformity as "A change in behaviour in response to real or imagined group pressure when there is neither direct request to comply with the group nor any reason to justify the behaviour change". Conformity is the degree to which members of a group will change their behaviour, views and attitudes to fit the views of the group. The group can influence members via unconscious processes or via overt social pressure on individuals. Influence by peers: People have the need to fit in with the society not many people dare to be different. Psychologists have discovered that even the most independent-minded of us will conform to social pressure when we are with a group of people Emphasis on importance: People see being accepted by others and the sense of belonging as something much more important than actually being right or wrong in a situation. It can sometimes be easier for somebody to be wrong but like everyone else than being right but different to others. ...read more.

In obedience you are being told what to do by someone of a higher status than you. In conformity you feel the psychological need to be accepted by others. I would personally define obedience as the action of following the instructions received by a superior, regardless of your personal feelings towards this. Being ordered or instructed to behave in a specific way: Obedience involves a person in authority telling you to do something or to behave n a specific way. You may not want to do this but as you are in a lower rank to the person ordering you have to carry these activities out regardless of your personal views. An example may be for example within the RAF a person in a higher rank may say to you "Get rid of those side burns" and although you may not want to you will do this. This shows that you are moulding your behaviour to what you are told to, regardless of what you personally want. Ordered by someone in higher authority: If somebody that was in the same social level s you and had the same authority as you, ordered you to do something you didn't want to do, you would be much less likely to carry this request out. ...read more.

There was another main study carried out to analyze obedience in a real life scenario, this was done in a hospital with nurses. It was conducted in the following way the study was set in a psychiatric hospital in the America. The participants were 22 nurses on night duty. An unknown 'doctor', who was a confederate, telephoned the hospital and spoke to a nurse. He instructed them to give medication to a patient. The medication was a drug with a maximum dosage of 10Mg (which was shown on the label of the bottle). The doctor instructed the nurse to give a dosage of 20Mg to the patient and said that he would sign the relevant authorisation papers when he arrived in the hospital in 10 minutes time. It was hospital rules to not take these kinds of orders on the telephone. This was done with each of the 22 nurses. The result was that 21/22 of the nurses obeyed the telephone instruction and began to prepare the medication before they were stopped and the situation was explained to them. ?? ?? ?? ?? 1 Miriam Smith-Renieblas Diversity in the Public Services ...read more.

It is advisable to write a plan before starting an essay because this organises the writing into some logical order. This would help the writer to get a better score too. At present the writer has gone into too much detail with certain experiments and not enough with others. The writer has not really addressed the essay question either since public service has not been addressed.